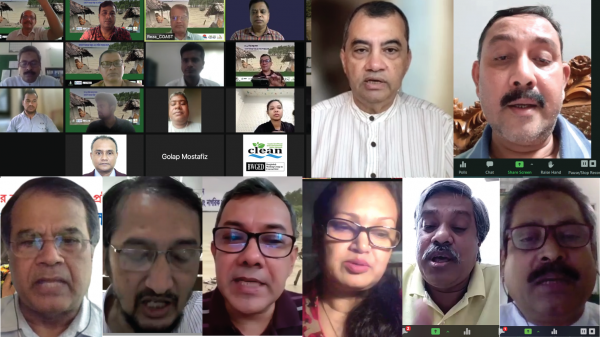 Civil society organizations (CSOs) urged an inclusive process from the government to strengthen country interest in the upcoming UN climate conference (Conference of the Parties, CoP 26).

From a virtual conference organized today, they also opined that, as one of the Most Vulnerable Countries (MVC), Bangladesh should adopt a firm stance in support of a legally binding commitment under the Paris Agreement in order to secure additional funding for improved adaptation activities and to avoid recurrent Loss and Damage. COAST foundation hosted an online session titled “CoP-26: Government Position and CSO Perspectives.”

Saber Hossain Chowdhury MP and the Chair of Parliamentary Standing Committee on Ministry of Environment, Forest and Climate Change was the Chief Guest, while  Asheq Ullah Rafiq MP Cox’s Bazar-2 was the Special Guest of the seminar moderated by Rezaul Karim Chowdhury of EquityBD. Among others Mirza Sawkat Ali, Director of Department of Environment, Md. Shamsuddoha of CPRD, Mrs Rabeya Begum, Co-Chair of CANSA-BD, Md. Jahangir Hossen Masum of CDP, Mohan Kumar Mondal of LEADERS, Mr. Shamim Arefin of AoSED-Khulna, Hasan Mehedi of CLEAN,  Kawser Rahaman of Janakhanta spoke at the occasion.

Syed Aminul Hoque said that,  the CoP 26 is crucial since it will take a main stocktake on newly submitted Nationally Determined Contributions (NDCs), establish the Loss and Damage Mechanism, and providing $100 billion in Green Climate Fund (GCF).

In this context, Bangladesh’s government should play a critical role in safeguarding the country’s interests, particularly in protecting vulnerable people and reducing the effects of regular loss and damage caused by climate change.

He addressed a number of demands to the government delegation, including: i. Continued revision of NDCs by developed and polluter countries based on their fair contribution and economic volume in order to keep global temperature below 1.5 degrees Celsius; ii. Developed countries must secure additional funding beyond the GCF to mitigate and adapt to loss and damage; iii. The GCF must streamline its funding process in both the readiness program and the project proposal preparation stages; and iv. Ensure appropriate technologies for MVCs through the CTCN [UNFCCC Climate Technology Centre Network] to support their resilience in both mitigation and adaptation contexts.

Saber Hossain Chowdhury stated that Bangladesh will undoubtedly play an effective part in CoP 26 in order to divert the negotiation flow in the country’s favor. ‘Apart from that, our Prime Minister will participate and speak out openly to encourage developed countries to adhere to realistic GHG reduction targets and to get $100 billion in GCF funding’- he added.

‘We have drafted a country position for CoP 26 and are coordinating issues among government officials’-said Mirza Sawkat. he also said, ‘the government’s position has primarily focused on finance and technology, and we will endeavour to reach a consensus to balance the GCF fund for adaptation by 50 percent. CSOs should also be considered separately’.

Kawser Rahaman, Shamim Arefin, and others stated that Bangladesh has played a positive role in the climate negotiations because of the strong cooperation between civil society and the government, which was previously our strength and is now disturbed. They suggested that for CoP 26, a common position be prepared, including the opinion of the CSO.

Md. Shamsuddoha said, ‘Bangladesh should exert strong pressure on developed countries to increase their NDC targets, because the Paris Agreement will lose its meaning if the target is not increased, and rising temperatures will render our country unrepairable, resulting in massive losses and damages.’