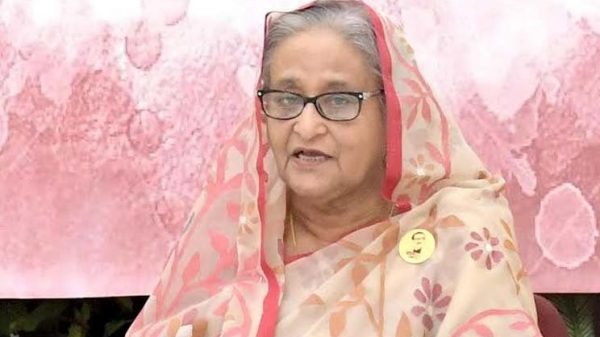 vested section of people deliberately perpetrated incidents to tarnish the
image of the country.

“Some incidents happen or are being perpetrated time and again. You
(people) must feel that it is being done intentionally so that the image of
Bangladesh is tarnished (abroad),” she said.

The premier came up with the observation while inaugurating the newly
much-awaited bridge constructed over the Payra River in Lebukhali area on
Barishal-Patuakhali highway.

She also laid foundation stone of the up-gradation of Dhaka-Sylhet and
Sylhet-Tamabil Highways into six-lane with separate SMVT lanes.

The prime minister said a group is busy to defame the country, adding that
it is no matter to them, whatever development or good work is carried out
in the country.

“What do they want? Actually they don’t want normal democratic process to
continue in the country,” she said, continuing that, “Their importance is
increased if an unusual situation takes place in the country.”

Sheikh Hasina said they don’t see the development rather “they want to
destroy” and it is the reality. “So the countrymen have to remain alert about
this,” she observed.

The premier said Bangladesh will move ahead through communication across
the country and none can pull it back.

Road Transport and Bridges Minister Obaidul Quader delivered the welcome
address while secretary of the ministry Nazrul Islam made presentation on the
bridge and highways.

Later, the premier exchanged views connecting with Payra Bridge end at
Patuakhali and the office of the Deputy Commissioner of Sylhet. Foreign
Minister Dr AK Abdu Momen, among others, also spoke.

A documentary on the newly constructed bridge and Dhaka-Sylhet and Sylhet-
Tamabil Highways was screened.

The Payra Bridge has a “bridge health monitor” system, which has been
installed for the first time in a bridge in the country.

The system will send signals of natural disasters, including thunderstorms
and earthquakes or any damage.

The both sides of 1470 metre long and 19.6 metre wide bridge will be
connected by cables, while it is 18.30 metre high from the water level to
ease movement of ships coming from and to Payra port.

In the construction of the bridge, a single pillar has been used in the
middle of the river which is expected not to disrupt the normal water flow of
the river.

With the opening of Payra Bridge, direct road communication will be
established between Dhaka and Kuakata after being completed the construction
of the Padma Bridge.

The prime minister said after assuming office in 2009, the Awami League
government has concentrated on the development of the country, especially in
the southern region.

Today an aesthetic Payra Bridge was built over the Payra River which would
not only increase tourism opportunities but also expand business as the
government is setting up Payra Sea Port, she added.

Mentioning that a communication network will be established all over the
Bangladesh, she said, “If the Padma Bridge is opened, the people of the south
will have no more trouble and that’s why we are building other bridges at the
same time.”

Expressing gratitude to the people for voting Awami League, Sheikh Hasina
said, “Due to consistency of the government, no one can undermine today’s
Bangladesh, everyone respect Bangladesh now. The country has earned
acclamation from the whole world.”

Recalling the country’s miserable days after killing Father of the Nation
Bangabandhu Sheikh Mujibur Rahman, the premier said those who were in power
directly or indirectly from 1975 to 1996 and 2001 to 2008 wanted to stop the
country’s development.

“It was not their desire that Bangladesh will get honor across the world
and the people of this country will move around the world with their heads
high. This was very much painful for us,” she said.

About the Covid-19 pandemic, Sheikh Hasina asked all to follow the health
safety guidelines to be protected from the deadly virus.

“We’re providing vaccines . . . no one will be left out as we’re taking
steps so that everyone can remain safe,” she said.

The head of the government said schools and colleges are gradually
reopening so there remains no hurdle in academic activities for the students.

She also mentioned that the government has adopted Vision 2021, Vision 2041
and Delta Plan 2100 to advance the country.

Referring to her government’s endeavour to provide electricity to all
houses, she said initiative has been taken to bring modern technology to the
grassroots so that people can work and eat at home and become self-
sufficient.

Sheikh Hasina said the southern part of Bangladesh, which has canals,
rivers and water-bodies, is going to be the most affected by climate change.

“Therefore, as soon as we can make socio-economic development in this
region, it will help improve the quality of people’s life here. It will have
a huge impact on country’s economy and we will be able to take the country
further,” she added.