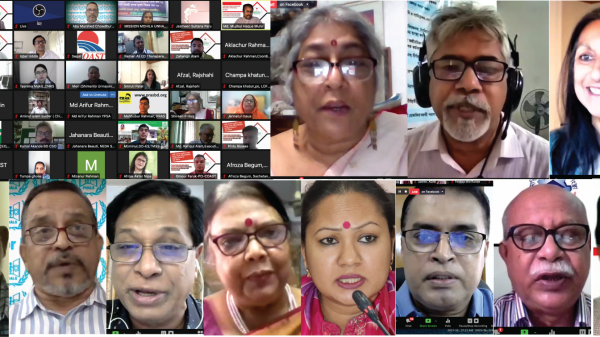 Speakers lauded against sub-contracting colonial attitude of aid agencies and urged for selection of policies implemented through a transparent process for an effective civil society sector in the country.

They pressed their demands from a virtual conference session titled “Partnership selection with a policy and through a transparent process for an effective civil society sector” held on Monday organized by BDCSO Process, a forum of around 700 grass root CSO/NGOs of Bangladesh.

Shireen Huq said, Nepal was never been colonized by a foreign power, it is the basic reason they have formulated rules that, any international organization whether it is the UN or INGOs, cannot take the project without partnership with local government or local NGOs. She also said that, Bangladeshi local NGOs are now mature enough so that all parties including the government should sit down and draft a partnership policy for humanitarian and development assistance based on foreign aid.

AKM Jashim Uddin highlighted about the experience with two international actors who have officially treated them as a sub-contractor or a vendor. Our government should have a political commitment in this regard as the approach should be for the best use of foreign aid, they must intervene in this regard.

Rafiqul Alam opined, most of the partner selection with international actors, is pre-selected, a major chunk of the foreign aid either goes to origin countries or is being spent by expatriates. Our members of the Parliaments should raise the issue in parliament.

Masuda Faruque Ratna stressed that international actors/aid agencies must have a partnership policy that is free from the conflict of interest of their staff and which should be transparent in practice. While they reject, they must tell what the weakness of the respective organization is.

Abu Moshed Chowdhury mentioned that international actors are supposed to provide 25 % of the fund to local NGOs directly, but they are hardly doing it, in respect of Rohingya response international actors handling around 95 % of funding. International actors brought a lot of non-local NGOs in Cox’s Bazar, if there are no funds they will flee out, it is against the spirit of accountable and sustainable local civil society building.

AHM Bazlur Rahman concluded saying that donors are creating a corporatization and monopolization culture in aid utilization at the local level, which is hardly healthy and competitive to create decentralized civil society building for the sake of humanitarian, development, human right, and democracy-building in our country.