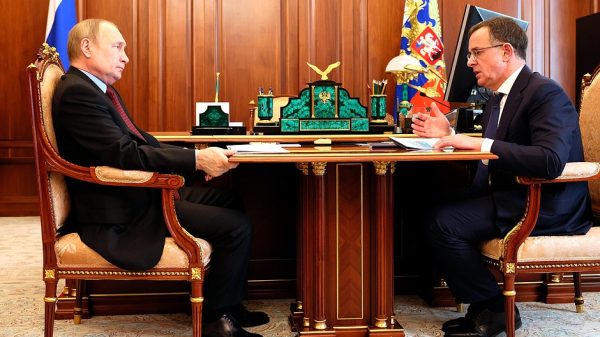 The President had a meeting with United Grain Company Director-General Dmitry Sergeyev. They discussed the company’s operations in Russia and abroad on July 06 2022.

President of Russia Vladimir Putin: Mr Sergeyev, the United Grain Company is our largest enterprise in this sphere of activity.

Vladimir Putin: The state owns a controlling stake in it, namely, 50 percent plus one share. You have an ambitious investment programme, and your earnings are growing. To the best of my knowledge, they soared by 62 percent last year and topped 100 billion rubles.

Thirteen years ago, you issued an executive order establishing the United Grain Company and listed it among strategic shareholding companies.

I would like to brief you on these three aspects, if I may.

The intervention fund is not just about the country’s food security. It helps producers and processing companies during years of drought and crop failure and it is used for humanitarian purposes as well. Also, it supports the elevator infrastructure and performs social functions.

Vladimir Putin: The bulk of the humanitarian aid is going through you, isn’t it?

Dmitry Sergeyev: Correct, through the United Grain Company, and we take it from the intervention fund.

The fund also performs social functions. With 3 million tonnes of grain stored at the intervention fund, about 100 elevators in 24 regions will be used, providing jobs for 10,000 employees.

Vladimir Putin: How many employees do you have?

The intervention fund performed at its peak in 2010 with 456 elevators and 35,000 employees engaged in the effort.

Vladimir Putin: The average salary is around 90,000, correct?

Dmitry Sergeyev: Yes. Our average salaries are quite good.

Commodities exchange indexes are yet another promising area.

Vladimir Putin: Please, tell me in more detail how you intend to work in this area.

Dmitry Sergeyev: Mr President, in 2021, the United Grain Company (UGC) started online auctions at the National Commodities Exchange – with support from the Ministry of Agriculture and the Central Bank of Russia. In less than a year, they showed their effectiveness with trade volumes worth 15.6 billion rubles. This will be our domestic index; we will no longer use indexes from foreign exchanges like the Chicago Mercantile Exchange or the International Futures Market of France. I mean, this is promising and is working successfully, and much of the client base uses this exchange.

Dmitry Sergeyev: Yes, only grain. These are grain, wheat indexes.

The company is also focusing on foreign trade. In 2021, exports amounted to almost 3 million metric tonnes. Our main goal is to fully bypass international trade mediation and work directly with the importing countries. Egypt is probably our main client. Over two agricultural seasons, we ranked highest among Russian exporters with 1.5 million metric tonnes of wheat.

Moreover, with our partners from friendly countries, we are transitioning to payments in national currencies. For example, we have signed several contracts with our Turkish partners. The latest of these, signed in March, is payable in rubles; the overall total will be about 3 billion rubles.