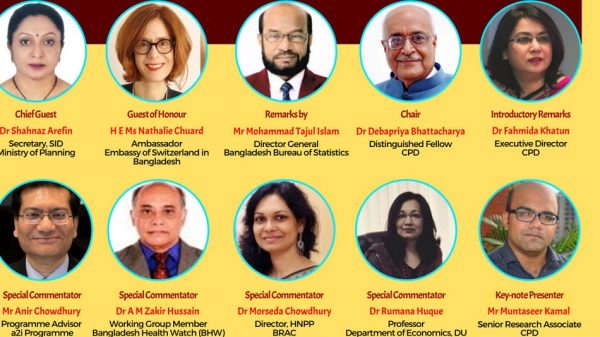 Bangladesh embraced new institutional frameworks which enabled them to collect data in real-time.

There were institutional data initiatives in the face of the pandemic, but they are yet to evolve into a structured and regular system.

The COVID-19 targeted data initiatives were both demand and supply-driven.

The pandemic created an opportunity to build a partnership between government and non-government entities.

Such observations were derived from a webinar titled ‘Data-driven Policy Making During the Pandemic: Taking the Experience Forward’ organized by Centre for Policy Dialogue (CPD) held on Thursday to provide a more up-to-date picture of the data ecosystem by mapping and reviewing the country’s initiatives.

According to CPD, the fallouts of the COVID-19 pandemic had exponentially increased the demand for real time and credible data.

In response, several new and innovative data initiatives had emerged in Bangladesh.

However, data deficits were still inhibiting the government from pursuing necessary and effective public policy actions to combat the scourge.

Muntaseer Kamal, Senior Research Associate of CPD made the key note presentation in the webinar.

Dr Shahnaz Arefin, NDC, Secretary, Statistics and Informatics Division (SID), Ministry of Planning, Government of Bangladesh was the Chief Guest of the webinar.

HE Nathalie Chuard, Ambassador, Embassy of Switzerland in Bangladesh was the Guest of Honour.

The research revealed that there were institutional mechanisms and systemic efforts currently in place in Bangladesh to generate basic statistics given COVID-19.

In some instances, the higher-ups in the government had to be pursued proactively to sensitise them for undertaking the initiatives.

A number of innovative data initiatives were taken in view of the COVID-19 pandemic.

Some of these were built upon pre-existing data generation and management systems (doing by learning). Others had to be developed from the ground up (learning by doing).

There is an institutional arrangement of integration, coordination and reconciliation within the data ecosystem.

The institutional arrangements are concentrated on health and have not spilt over to other areas of the data ecosystem. In the case of most of the initiatives, a ‘government agency centric’ approach was followed while a selected few took the ‘whole of society’ path.

The government entities and officials were able to perform in a coordinated manner.

There were some instances where non-government entities were connected to such systems. Most of such data system is affiliated with the DHIS2 platform of DGHS. There is a systematic process of documenting and archiving the generated statistics and relevant stakeholders can access these statistics when required. The documenting and archiving process is mostly scattered and accessing micro-level data may become an arduous task.

The think tank stressed that the majority of the data initiatives, both government and non-government, have well defined and formal storage systems. A formal mechanism for accessing COVID-19 related data from the government was absent. Accessing data becomes easier with pre-existing liaisons or through informal channels.

The research outlined that data access becomes difficult due to complex and lengthy bureaucratic processes, privacy concerns on the part of government, or absence of any designated person or system to provide data.

Moreover, the generated statistics enabled efficient delivery of the various policy measures taken to tackle COVID-19. All data and analyses did not result in decision making. Buy-in by the policy actors was slower for many cases, and often did not take place. The policy use of data was found to be rather limited.

It was revealed that there was a clear lack of understanding on the part of the government as regards the data initiatives. The multitude of actors involved in the decision-making process made the situation worse.

The policymakers were not ready to accommodate the data initiatives undertaken by subordinate agencies at the beginning of the pandemic. The acceptability increased prior to the second wave.

It was encouraging to find that the government is interested in accommodating data-driven findings from academicians and researchers in order to plan future interventions. A number of COVID-19 targeted data initiatives have been undertaken by NGOs or CSOs in Bangladesh. Regrettably, their acceptance at the policy level remained very limited.

The generated statistics are adequate for policy design, policy implementation, and monitoring process of the policies. New data obviously contributed to policy actions; however, not all demands for data were met.

The CPD suggested that although the continuous provision of COVID-19 related data is commendable, there are some underlying concerns regarding the accuracy, representativeness and quality of data. This puts the usability of such data at serious risk.

The experience of international organisations and other countries will help Bangladesh to adopt the best practices and vice-versa. There are obvious scopes for cross-learning while being cognisant of the country context.

The scope to utilise some pre-existing data initiatives and replicate some of the new ones is evident within the data ecosystem of Bangladesh. Strengthening the non-government entities would allow expanding the data ecosystem both vertically and horizontally.

Adoption of global good practices should take cognisance of the country-specific context.

The think tank also revealed that the improvements in the data ecosystem during the pandemic were largely concentrated in the area of health. The use of such initiatives was limited in providing public support. Even within the health issues, for the rehabilitation domain, no such initiative was found.

Pre-conditions were important for the success of the initiatives. While using the NID database was possible as it covered a larger section of the population, the use of the tracing app failed due to very little penetration of smart phones and other technical issues.

Overall mindset and flexibility of the stakeholders were also found to be critical as evidences suggest that all data and analyses did not result in decision making.

Buy-in by the policy actors was slower than it should be for many cases and often did not take place. There is also ample scope for improving transparency in these initiatives. This has perhaps also constrained improving political buy-in.

The scope for scaling up and involving more stakeholders could be done with improved transparency.

The COVID related data initiatives manifest evolving synergy among the actors and activities within data ecosystem in Bangladesh. There have been several new and positive data initiatives, particularly in pandemic-related health issues which improved over time in terms of scope, efficiency, institutional capacities and utilisation in the policymaking.

The government primarily took these initiatives with the view to take immediate pandemic response. The government accommodated supply-driven initiatives as and when necessary, despite some early reticence. During this pandemic period, Bangladesh had made the use of new and innovative data technology such as telecom data and apps.

They concluded that the new partnerships involving multiple stakeholders both within the government agencies and with the non-government organisations were not necessarily absent in the past, but definitely broadening the scope and expediting the process compared to past experiences.

There was a considerable improvement of data dissemination as evinced from developing dashboards, regular press releases, and use of websites and social media platforms.

Overall, political buy-in is critical for all three of the aforementioned areas. As had been evinced, the data-driven approach towards policymaking has shown some improvement during the pandemic.

However, the data generators and the knowledge community must continue their endeavour to sensitise the policymakers regarding the usefulness of data and its use.

To ensure this, documenting the experience, generating evidence of the positive impacts of such initiatives and opinion building by engaging stakeholders will be needed.

The study was focused to identify a number of best practices from global and national experiences for replication and adaptation in policymaking in Bangladesh.