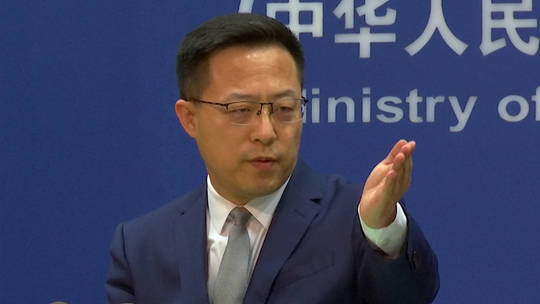 Beijing has urged Washington to cut off negotiations to improve trade ties with the island.

The Chinese government has insisted that Washington end its efforts to expand economic and military relations with Taipei after the latest round of talks between US and Taiwanese officials, arguing the moves threaten “peace and stability” in the region.

Commenting after the US declared a new initiative to bolster trade earlier this week, Chinese Foreign Ministry spokesman Zhao Lijian said Beijing “firmly opposes” all forms of official interaction with the island, arguing that diplomatic contacts should be arranged through the mainland alone.

“Lately the US has made frequent moves and kept devising schemes on Taiwan. They are nothing but attempts to breach the one-China principle, bolster ‘Taiwan independence’ separatists and disrupt peace and stability across the Taiwan Strait,” he said on Thursday, referring to Beijing’s official stance that Taipei is part of China-proper.

There is but one China in the world. Taiwan is an inalienable part of China’s territory.

The Chinese government maintains that Washington has endorsed that principle in the past through a series of “joint communiques,” and that the “consensus of the international community” favors its current policy.

Ahead of a trip to Asia, US Defense Secretary Lloyd Austin recently told Japanese media that the conflict in Ukraine “won’t distract us from facing the challenges to a free, stable and secure Indo-Pacific region,” also suggesting that the US would step up military aid and training to Taiwan in the future. To date, the Biden administration has approved multiple arms transfers to the island, while the president himself has indicated that the US would come to Taiwan’s defense in the event of a Chinese attack. The American military, moreover, has performed regular sail-throughs in the disputed Taiwan Strait under Biden, repeatedly stoking the ire of Chinese officials.

“If the US truly wants ‘a free, stable and secure Indo-Pacific region,’ then it should stop the erroneous practice of ganging up and stoking political antagonism and military confrontation in the region, and play a constructive role in enhancing mutual trust and cooperation among regional countries,” the spokesman added, addressing Austin’s comments directly.

Taipei, for its part, recently outlined its own stance on military ties with the US, with President Tsai Ing-wen stating the island would seek “closer and deeper Taiwan-US cooperation on matters of regional security” late last month, while hinting that the Pentagon is “proactively planning” stepped-up support for Taiwanese forces.