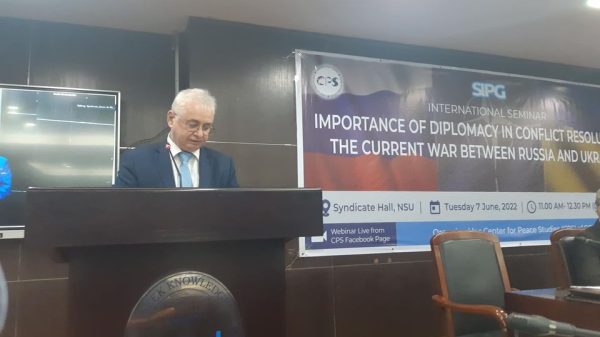 Ambassador of Russia to Bangladesh, H.E. Alexander Mantytskiy, delivered speech at a seminar on “Importance of Diplomacy in conflict resolution in the context of current war between Russia and Ukraine” on June 7, 2022 at Center for Peace Studies of the South Asian Institute of Policy and Governance (SIPG), North South University, Dhaka.

In his remarks the Diplomat said, I am grateful to the organizers of this seminar for the opportunity to exchange views on the current situation around Ukraine.

In the first place, let us be clear about the terms. In order to call a conflict a war, one of the conflicting parties must declare war, according to a recent release by the Embassy of Russian Federation in Bangladesh .
However, neither Russia, nor Ukraine has done so. Therefore, there is no legal ground to use this word. Unfortunately, to some it seems just a technicality. In my remarks, I will refer to this conflict as the special military operation, as pronounced by Russian President Vladimir Putin.
The special military operation announced on February 24 was a timely and necessary decision taken when hostile military infrastructure drew near to the Russian borders, when Ukraine became thick with hundreds of foreign military advisors, when NATO members started pumping our neighbor country with cutting-edge weaponry.
Of course, this did not happen overnight. Rather, there was a long process when Russia had been reaching to its Western partners, voicing its legitimate security concern over the deteriorating situation in regional security. Let us take a quick look at the developments in retrospect.
It seems that distinguished panelists have forgotten that, in February 2015, Resolution 2202 of the UN Security Council unanimously endorsed the Minsk agreements that required the Kiev regime to start a direct dialogue with Donetsk and Lugansk, implement the agreed-upon provisions to grant special status to these regions in eastern Ukraine and to reflect this in the Constitution of Ukraine.
Kiev was supposed to hold, on agreement with Donetsk and Lugansk, elections, provide amnesty, disengagement of the sides, a ceasefire and the withdrawal of heavy weapons. However, it never happened. We have for years knocked on various doors in Europe and the United States, urging our Western colleagues to make Ukraine fulfill its commitments.
But, the West was deaf to it, as it was deaf to the fact that Ukraine publicly refused to implement the UN Security Council resolution which endorsed the Minsk agreements signed by France and Germany. 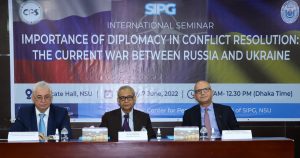 This refusal was the decisive factor behind the current situation. Encouragement of neo-Nazi theories and practices legalized by new Ukrainian laws was another unacceptable step by the Kiev regime. Eventually, we had no other choice than to recognize the republics of Donetsk and Lugansk and rally to the defense of Donbass, Russian culture, language, and media that were banned in Ukraine in the past few years.
Now let us take a broader look at regional security. 1997 saw the Founding Act between Russia and NATO, which clearly stated that we are not adversaries and none of us will strengthen our own security at the expense of the security of others.
Equal and indivisible security was proclaimed as the goal and the underlying principle of our work. The same principle of indivisible security was enshrined in a broader context for all countries in the Euro-Atlantic region at the OSCE summits.
A specific formula was set out there: security must be equal and indivisible, each country has the right to choose alliances, but no country has the right to strengthen its security at the expense of the security of others. At the same time, it was stated that not a single organization in the Euro-Atlantic should be entitled to claim dominance in security matters throughout the vast geopolitical space.
Regrettably, US-led NATO colleagues have grossly violated the obligation not to strengthen their security at the expense of others.
It resulted in unrestrained NATO expansion to the East. We have been warning all these long years that this will not end well and that threats are being created to our security, despite the numerous promises and commitments made by the West.
In 2009, we proposed concluding a European Security Treaty with legally binding obligations. We received a polite and condescending answer to the effect that this would not work, because the West is prepared to provide legal security guarantees only to NATO members.
In November 2021, we came up with yet another proposal. President of Russia Vladimir Putin proposed concluding a Russia-US and Russia-NATO treaty. It would affirm security guarantees for all countries of the region, including Ukraine and other states that are not members of any military-political bloc. Blocs will not be expanded. The participants will outline reliable guarantees that will not create a feeling of danger or threat for anyone. This was arrogantly shot down as well.
This is the brief account of our relentless and earnest diplomatic efforts aimed at finding a durable and acceptable-to-all solution to the regional security issues.

Unfortunately, they found no appropriate and meaningful reaction from our Western partners. Their refusal to discuss sensitive aspects of Russian national security and inability to make Ukraine abide by its international commitments made the special military operation inevitable.
Today, we find ourselves in the midst of the gravest crisis of the modern times, which has repercussions for the entire world.
And yet, there is still no place for true diplomacy, as Western countries keep pumping Ukraine with razor-edge weapons, their diplomats vehemently demand Russian defeat in the battle field calling upon Ukraine to fight till the last Ukrainian.
Josep Borrel is particularly notorious for his aggressive rhetoric and war-mongering unbecoming for the head of the European diplomacy.
As far as the contacts with the Ukrainian side are concerned, we have never refused to talk, as evidenced from the meetings in Belarus and Turkey, as well as negotiations through videoconference. However, for these meetings to be fruitful, it requires a constructive position from Kiev which presently is nowhere in sight. Moreover, the Ukrainian patrons in Europe and the US seem to bar Keiv from having any substantive interaction with Moscow, which makes all the efforts futile.
For Moscow, diplomacy has always been the first choice. Our doors remain open for all faithful efforts. But it needs more than one party to negotiate as it was mentioned by Dr Nicole Deitelhoff.
It also requires an ability to conduct a respectful dialogue, to be open-minded and responsive towards aspirations and sensitiveness of the other side. As of now, these prerequisites are absent.
To mention the last, some NATO countries (Bulgaria, Montenegro and Northern Macedonia) refused to allow the plane of the Russian Minister of Foreign Affairs Sergey Lavrov to fly through their airspace to visit Serbia, He concluded.
Professor Tawfique Haque, distinguished panelists, experts, academics and media, among others, took part in the seminar.
Read us@googlenews