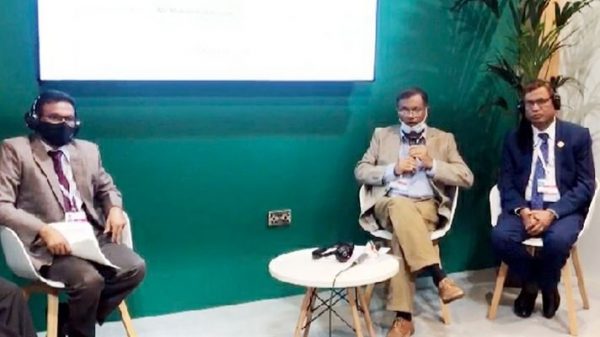 Information and Broadcasting Minister Dr Hasan Mahmud has said cent percent people of the country will be brought under electricity coverage within this year.

He hoped that the use of the country’s 40 percent energy would be ensured from renewable sources by 2041.

Hasan, also the Awami League joint general secretary, was speaking at a discussion at Bangladesh pavilion on Tuesday evening on the sidelines of the Conference of Parties (COP)-26 in Glasgow of Scotland, according to a message received here today.

Chaired by Power Division Secretary Md Habibur Rahman, the meeting was addressed, among others, by member of Parliamentary Committee on Climate Change Tanvir Shakil Joy and chairman of Renewable Energy Authority Mohammad Alauddin.

Speaking as the chief guest, Hasan said the power and energy sectors have achieved a remarkable progress under the visionary leadership of Prime Minister Sheikh Hasina.

He said when the government assumed power in 2009, the country’s power generation capacity was only 3,500 megawatts and it increased to 24,000 megawatts in the last 12 years.

As a result, he said, the country witnessed a huge development, per capita income and average life expectancy of the people increased and the living standard of people improved too.

People’s income has also increased due to their access to electricity in remote areas, he added.

In addition, Hasan said, Bangladesh graduated to a middle-income country due to the increase in power production, while per capita gross domestic product (GDP) increased to US$ 2,250 in 2021.

He said Bangladesh surpassed neighbouring countries, including India and Pakistan, in all economic indexes as Prime Minister Sheikh Hasina announced stimulus packages to keep the lives and  livelihoods of people, including GDP, operational during the COVID-19 pandemic.

It was possible to archive due to the country’s political stability in continuation of the Prime Minister Sheikh Hasina government, he added.

The information minister said Bangladesh would be benefited if development partners come forward with modern technology and financial assistance to increase the use of renewable energy in the country and meet its target of 40 percent renewable energy use by 2041.

He said Bangladesh will be benefited as well its environment could be protected if renewable energy is generated from wastes of city corporations and the use of solar energy is increased.

Hasan said there is no alternative to technology and financial assistance in climate adaptation apart from introducing green technology.

Bangladesh has become the victim of climate change due to continuous carbon emission of the developed nations, he said.

Although the developed countries are responsible to global warming, those are not providing compensation and technological assistance to the climate affected countries, the minister said.

Dr Hasan Mahmud is scheduled to return home on November 17 after attending the climate meet.