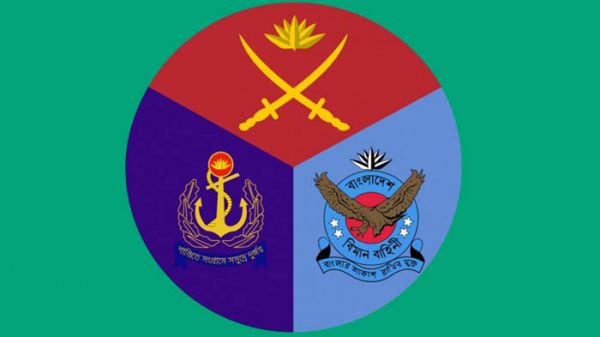 Bangladesh High Commission in New Delhi has observed the Armed Forces Day on Monday (November 22), marking the founding of Army, Navy and Air Force during the  Liberation War of Bangladesh in 1971.

The High Commission hosted a reception in Bangabandhu Hall of its chancery to mark the 50th  Armed Forces day by paying homage to the Father of the Nation Bangabandhu Sheikh Mujibur Rahman and the martyrs of the Liberation War of 1971.

Shri Rajnath Singh in his speech mentioned that Bangabandhu Sheikh Mujibur Rahman was the ray of hope during the war of liberation in 1971. He recalled the recent visit of Prime Minister of India Shri Narendra Modi to Bangladesh during the celebration of birth centennial of Bangabandhu. He further mentioned that the bilateral relationship between Bangladesh and India is now achieved the highest level and it will be strengthen till further.

This year Bangladesh is celebrating the ‘Golden Jubilee’ of its independence and the birth centenary of the Father of the Nation Bangabandhu Sheikh Mujibur Rahman. Bangladesh and India is also observing their 50th year of diplomatic relation and defence ties between these two countries.

High Commissioner of Bangladesh to Sri Lanka Tareq Md. Ariful Islam in his speech recalled the significance of the Day and highlighted the contribution of Armed Forces to nation building as well as to maintenance of global peace and security through participation in UN peace keeping operations.

GOLDEN JUBILEE OF THE ARMED FORCES DAY OBSERVED IN ISLAMABAD
Islamabad 23 November 2021 :
Bangladesh High Commission in Islamabad observed the 50th Armed Forces Day with due festivity and fervour. The Defence Adviser Brigadier General Abul Fazal Md Sanaullah hosted a reception followed by a dinner at a local hotel.
H.E. Senator Muhammad Talha Mahmood, Chairman, Senate Standing Committee for Finance, Revenue and Economic Affairs attended the event as a special guest. A large number of diplomats including the dean of the diplomatic corps, over 20 heads of missions, more than 50 Services Attachés, high government officials, head of think tank organisation, editors of reputed newspapers, office bearers of leading chamber of commerce, social elites, and their spouses attended the reception.
The Defence Adviser delivered the welcome remarks and the High Commissioner of Bangladesh to Pakistan H.E. Mr Ruhul Alam Siddique delivered the speech marking the day. They paid profound homage and tribute to the Father of the Nation and the martyrs of the Liberation War.
In their speeches, the genesis and historical significance of Armed Forces Day; foundation of Armed Forces by the Father of the Nation and his vision and dream; development and modernisation of Armed forces under the leadership of Honourable Prime Minister Sheikh Hasina; role of Armed Forces in safeguarding countries sovereignty and in nation building; Bangladesh’s championing of global peace under the aegis of United Nation as the largest troop contributing country; and, mutual cooperation were highlighted. After the speeches, a documentary prepared by the Armed Forces Division, was screened.
It may be noted that after the pandemic this was one of the largest gatherings where diplomats from almost all the expected missions attended.