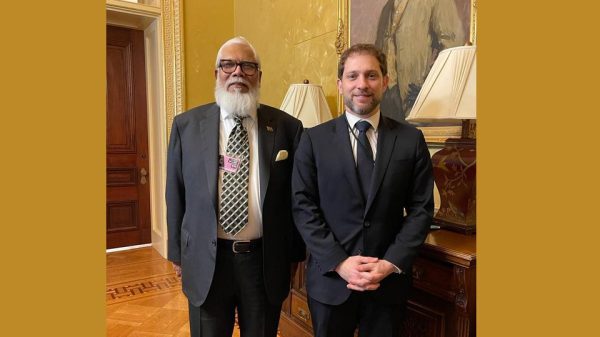 Adviser to the Prime Minister for Private Industry and Investment Salman Fazlur Rahman  held a meeting with US Principal Deputy National Security Adviser Jon Finer at the White House in Washington, DC on yesterday.

At the meeting, They recognized the strength of Bangladesh-US relationship that has evolved over the last five decades.

Adviser told Finer about Bangladesh’s tremendous success in socioeconomic and human development in the last 14 years under the prudent leadership of Prime Minister Sheikh Hasina and thanked the US for its support to these achievements. He also thanked the US for providing humanitarian assistance and political support for the Rohingyas sheltered in Bangladesh.

Finer acknowledged Bangladesh’s extraordinary economic growth in recent years and commended Bangladesh for its generosity to host over a million Rohingya population. He expressed his administration’s willingness to work more closely with the Bangladesh government on governance, labor and human rights issues. While expressing similar interest to work with the US government, Adviser Rahman stressed that the US and other development partners should duly recognize measures already undertaken by the Bangladesh Government for the continuous improvements of labor and human rights in the country.

Recent US sanction on RAB and its senior officials was also discussed at the meeting and Adviser Rahman requested the US government to lift the sanctions as soon as possible. Adviser drew the attention of Finer about Bangabandhu’s self-confessed killer Rashed Chowdhury, currently staying in the USA and sought their assistance for his early deportation to Bangladesh.