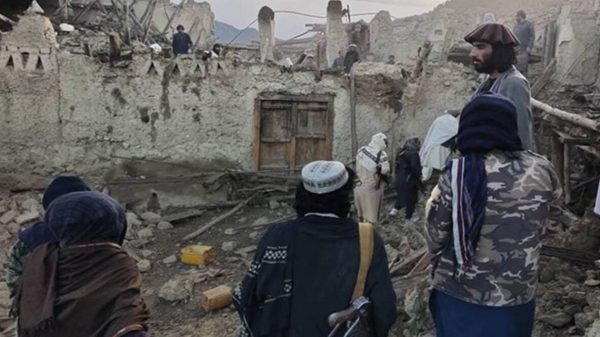 More than 1,600 others were injured in the 5.9-magnitude quake, which was centered in the country’s remote southeast near the Pakistan border.

Here’s what you need to know:

KABUL, Afghanistan — More than 1,000 people were killed and 1,600 others injured after a 5.9-magnitude earthquake struck a remote and mountainous region of southeastern Afghanistan near the border with Pakistan early Wednesday, officials said.

The quake struck about 28 miles southwest of the city of Khost, a provincial capital in the country’s southeast, the United States Geological Survey said, and had a depth of about six miles.

Search-and-rescue efforts were continuing, led by the Afghan Ministry of Defense, but wind and heavy rain were preventing helicopters from landing and casualties were likely to rise, the United Nations’ emergency response agency said.

Some of the areas hit by the earthquake are in remote, rough country near the Pakistani border and were the scene of heavy fighting before and after the Taliban takeover of Afghanistan. Telecommunications are poor or nonexistent, making it hard to get a full accounting of the casualties.

Paktika is one of the country’s most sparsely populated provinces and also one of the poorest, with residents in some areas living in earthen homes. With rugged terrain and little land flat enough for farming, many people eke out a living in the forests, illegally cutting trees to sell as firewood.

Nearly 2,000 homes were destroyed, said Ramiz Alakbarov, a deputy special representative for Afghanistan for the U.N. Afghan families are typically large and multiple families sometimes live together, he said, meaning the earthquake will likely displace many people.

Mohammad Almas, the head of aid and appeals at Qamar, a charity in Afghanistan active in the area, said he expected the death toll to be high, because the affected areas are far from hospitals and because the earthquake happened at night, when most people were indoors sleeping.

As many as 17 members of the same family were killed in one village when their home collapsed, he said; only one child survived. Mr. Almas, reached by phone from Pakistan, said that more than 25 villages were almost completely destroyed, including schools, mosques and homes.

Sarhadi Khosti, 26, who lives in the Sperah district of Khost Province, said he had been woken up by the earthquake after 1 a.m., and that a number of houses — especially those made of clay or wood — had been completely destroyed. He said that helicopters had transported some of the wounded to hospitals in Kabul and neighboring provinces.

“For now, we still are busy pulling the dead or injured from under the rubble,” he said.

The quake struck about 300 miles north-northeast of the site of a deadly 6.4-magnitude earthquake in Pakistan in 2008, the U.S.G.S. said. More than 200 people were reported killed at the time.

The earthquake was felt in Kabul, the Afghan capital, and across the northern part of neighboring Pakistan, according to a map that the European Mediterranean Seismological Center posted on its website. The U.S.G.S. said that a second quake, of 4.5 magnitude, struck about 30 miles southwest of Khost about an hour later.

Afghanistan earthquake Live Updates: An earthquake of magnitude 6.1 killed at 1000 people in Afghanistan early on Wednesday, officials said, adding that 1500 people are likely to be injured according to state-run Bakhtar News Agency. The quake struck about 44 km (27 miles) from the city of Khost, near the Pakistani border, the U.S. Geological Survey (USGC) said.

Most of the confirmed deaths were in the eastern Afghan province of Paktika, where 255 people had been killed and more than 200 injured, said interior ministry official Salahuddin Ayubi. In Khost province, 25 people had been killed and 90 taken to hospital, he said. The state-run Bakhtar news agency reported the death toll and said rescuers were arriving by helicopter. The news agency’s director-general, Abdul Wahid Rayan, wrote on Twitter that 90 houses have been destroyed in Paktika and dozens of people are believed trapped under the rubble.

The European seismological agency, EMSC, said the earthquake’s tremors were felt over 500 kilometres (310 miles) by 119 million people across Afghanistan, Pakistan and India, according to indianexpress.com.