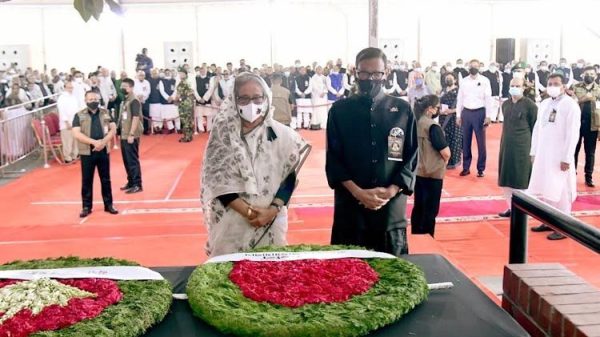 The ruling party Awami League (AL), its associate bodies of AL, its left-leaning allies and other political parties today paid homage to the victims of the brutal grenade attack that killed 24 people and wounded nearly 500 others.

Earlier, the day’s programmes started with placing wreath at the memorial set up in front of AL’s central office in the city’s Bangabandhu Avenue to pay rich tributes to the memories of those who were killed in the attack.

Later, the premier along with AL General Secretary Obaidul Quader paid tribute to the martyrs on behalf of Awami League.

A gruesome grenade attack was carried out at an anti-terror rally of Awami League (AL) on Bangabandhu Avenue in the capital on August 21, 2004 aiming to bankrupt the party leadership during the BNP-Jamaat alliance government.

With the grace of the Almighty, the then opposition leader and incumbent Prime Minister Sheikh Hasina and other front-ranking AL leaders narrowly escaped the carnage.

But, 24 people including the then Women Affairs Secretary of Awami League and wife of late President Zillur Rahman, Ivy Rahman, were killed and over 500 others injured in the attack and many of them became crippled for life.

In their memory, the day is observed every year through various programmes. This year marks the 18th anniversary of the grenade attack.