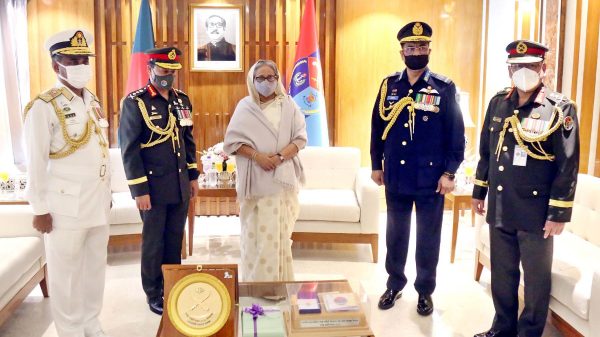 Prime Minister Sheikh Hasina today hoped that members of the armed forces would continue to uphold the glory of the country by contributing to development activities alongside protecting the sovereignty.

“I desire that you (members of armed forces) would be admired everywhere for your discipline and professional skills, (and) you can uphold the glory of the country by contributing to the development activities alongside protecting the sovereignty,” she told a reception at Dhaka Cantonment here.

From her official residence Ganabhaban, the premier virtually joined the function held at Senakunja marking the Armed Forces Day-2021.

She recalled that Father of the Nation Bangabandhu Sheikh Mujibur Rahman had said – “The Bangladesh Army will be the people’s army”.

Sheikh Hasina said, “I believe that the armed forces, inspired by the ideals of Bangabandhu Sheikh Mujibur Rahman and the spirit of the War of Liberation, are the pride of our nation.

Mentioning that November 21 occupies a special glorious place in the history of the country’s great War of Independence, she said on this day in 1971, the fearless members of the army, navy and air force launched a joint offensive against the occupation forces to accelerate the victory of the war.

She recalled that in early December, the Pakistani occupation forces were forced to surrender after a united offensive carried out by the allied forces along with the combined forces.

The Prime Minister said the nation remembers with deep respect the great sacrifices and heroism of the members of the armed forces in the War of Independence.

Sheikh Hasina, also in-charge of the Ministry of Defence, said apart from upholding the sovereignty of the motherland, the members of Bangladesh armed forces are always ready to make the highest sacrifices at any juncture of the country.

They carried out various activities as front-line fighters in the battle against the global pandemic Covid-19 and earned huge acclamation for the establishing quarantine centers and hospitals, making arrangements for repatriation of stranded locals and foreigners, transportation of critical patients and healthcare materials, she added.

The Prime Minister said members of the armed forces have also been working diligently to deal with coronavirus and both man-made and natural disasters alongside the socio-economic development of the country.

She said the army has gained widespread acclaims for the construction of the Access Control Expressway, Marine Drive Road, the scenic Hatirjheel, flyovers and the border roads, while the navy has made a name through building houses and infrastructures for the forcibly displaced Myanmar citizens in Bhasanchar.

In addition, under the afforestation program, she said, the air forces have recently conducted seedball throwing activities in remote areas of the country’s coastal areas and Chittagong Hill Tracts (CHT).

Sheikh Hasina referred to the statement made by Father of the Nation Bangabandhu Sheikh Mujibur Rahman in his address to the 29th session of the United Nations in 1974 where he pledged to continue his support to the efforts for establishing world peace.

In its continuation, she said, the members of the armed forces have not only brightened the image of Bangladesh but also the image of the United Nations in the global arena by fulfilling the responsibilities of establishing peace.

At present, in establishing world peace, Bangladesh has once again been able to retain its place of glory as the highest peacekeepers providing nation, she added.

The head of government said through the successful implementation of Vision-2021, Bangladesh has already achieved success in all the three indicators of being a developing country and it is ranked among the top five countries in the world in terms of economic progress.

Mentioning that at present Bangladesh is the 41st largest economy in the world, she said the government has brought the poverty rate down to 20.5 percent and raised the per capita income to US$ 2,554 alongside achieving unprecedented development in all socio-economic indicators.

“We’ve formulated a second Perspective Plan to achieve the ‘Sustainable Development Goals’ by 2030 and to build a hunger-poverty-free and prosperous-developed Bangladesh by 2041. We have adopted ‘Bangladesh Delta Plan-2100’,” she added.