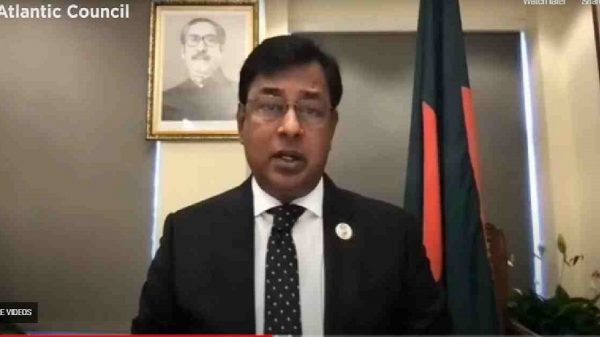 Atlantic Council, a leading think tank based in Washington DC, in partnership with Bangladesh Embassy in Washington DC, hosted a webinar titled “A new Bhashan Char agreement: What now for the Rohingya in Bangladesh” yesterday. Atlantic Council’s South Asia Center featured Ambassador of Bangladesh to the USA, M. Shahidul Islam, who delivered a keynote speech on the theme of the event and participated in a question-and-answer session. Senior Director of Atlantic Council’s South Asia Center Irfan Nooruddin gave an introductory remark.

There is nothing inherently wrong with any religion, race, or nationality; the problem emanates when these identities are used to generate malice and hatred for political or economic reasons,” the Ambasador added he called upon the international community to bring the traders of malice to justice if to establish a rule-based international order.

Bangladesh Ambassador categorically mentioned that whatever political developments take place in Myanmar, the Rohingya crisis has to be resolved by Myanmar as they have created the crisis. He added that Myanmar cannot be absolved from the responsibility whatever form of Government runs the country.

The discussants recalled with gratitude the generosity of Bangladesh Prime Minister Sheikh Hasina in sheltering the survivors of mass atrocities and saving their lives. The Atlantic Council’s South Asia Center expressed gratefulness to Bangladesh Ambassador for being willing to engage in the conversation.