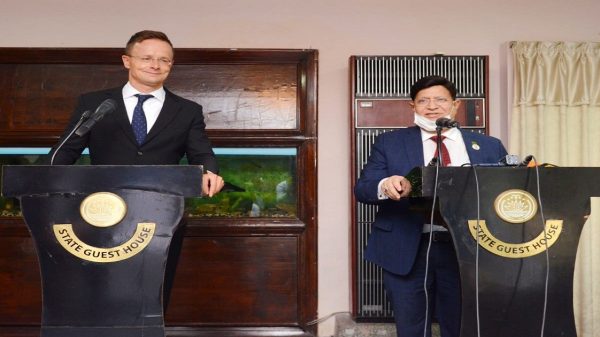 The ministers have signed two MoUs, one on Cooperation in the Field of Training and Education of Atomic Industry on the Peaceful Uses of Nuclear Energy, and another on the Diplomatic Exchange Program.

Mentioning Bangladesh’s leadership role in global climate discourse as the immediate past Chair of the Climate Vulnerable Forum (CVF), Dr. Momen has requested his Hungarian counterpart to extend cooperation to mobilize more support to implement the Paris Climate Agreement. Two ministers have also agreed to cooperate in clean and renewable energy sectors.

They have discussed future cooperation paths in the field of nuclear energy as both Bangladesh and Hungary are availing the same technology for respective new nuclear power plants. They have agreed on training and education of nuclear energy professionals.

The ministers have expressed satisfaction on the successful ongoing cooperation within the framework of the Hungarian scholarship (Stipendium Hungaricum) programme, which provides 140 scholarships annually to Bangladeshi students to pursue undergraduate, graduate and post graduate studies in Hungarian universities.

Dr. Momen has requested Hungarian Foreign Minister Péter Szijjártó to continue support in multilateral fora for the speedy and sustainable repatriation of Rohingyas to their homeland in Myanmar.

Minister Szijjártó has recalled his successful visit to Bangladesh in September 2020 and appreciated the exemplary socio-economic development of Bangladesh under the leadership of Prime Minister Sheikh Hasina.

The Hungarian foreign minister has announced that the Consular Office of Hungary in Dhaka will act as a full-fledged consular facility starting from today. Both the Ministers have expressed their hope to open resident missions in Dhaka and Budapest in a not-so-distant future.

Dr. Momen has handed over to Minister Szijjártó a special message from Prime Minister Sheikh Hasina addressed to the newly re-elected Hungarian Prime Minister Viktor Orbán. The Foreign Ministers have agreed to work on a possible visit within 2022 of Prime Minister Orbán to Bangladesh.

Foreign Minister Dr. Momen is currently in Hungary on an official visit.