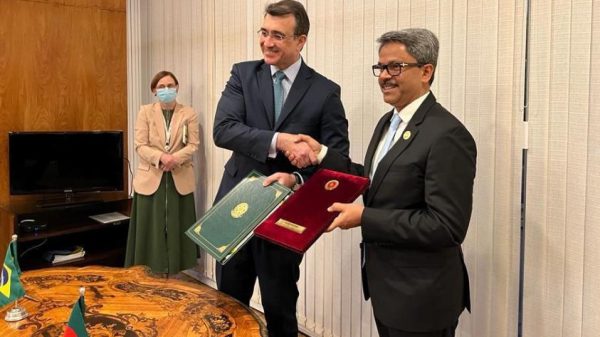 State Minister for Foreign Affairs Md. Shahriar Alam who is on a 4-day maiden official visit to Brazil signed an ‘Agreement on the Exemption of Visa for Diplomatic and Official Passports’ on the 50 years of Bangladesh-Brazil diplomatic relations. The Foreign Minister of Brazil Carlos Alberto Franco França signed the agreement on behalf of the Brazilian government on July 19 2022.

A high-profile business delegation led by the President of the FBCCI Mr. Jashim Uddin and the representatives of the Bangladesh-Brazil Chamber of Commerce (BBCC) accompanied the State Minister during the visit.

Recently the State Minister delivered a lecture for the trainee diplomats at the Rio Branco institute (Foreign Services Academy of Brazil) in Brasília. More than 100 guests comprising high officials from the host government, Ambassadors, members of the diplomatic corps, civil society, trainee diplomats, journalists along with members of FUNAG (Research Institute for International Relations) attended the event. Mentionable that Instituto Rio Branco is a ‘’state of the art’’ training center for diplomats from Brazilian and other parts of the world.

Giving an overview of our struggle for independence, the State Minister highlighted how the charismatic Leader Father of the Nation Bangabandhu led the nation to have the right to speak in its mother tongue and later the war for independence in 1971. Stressing the geo-strategic importance of Bangladesh, he explained how Bangladesh is connecting South Asia and Southeast Asia for a greater economic feat. He also highlighted the unprecedented socio-economic growth in Bangladesh under the visionary leadership of the Prime Minister Sheikh Hasina. State Minister Alam explained to the trainee diplomats of Rio Branco- how continuity of the government, investment in the rural economy and women empowerment led the country to sustainable and steady socio-economic strides. In the question-and-answer session it revealed that the State Minister’s lecture created huge interest among the trainee diplomats from Brazil and Bangladesh and its impressive trajectory of socio-economic progress.

State Minister Md. Shahriar Alam attended the ‘Celebration of 50th Anniversary of Bangladesh-Brazil Diplomatic Relations’ as Guest of Honour hosted by the Bangladesh Ambassador to Brazil Sadia Faizunnesa. In his remark the State Minister thanked and congratulated the Brazilians on the 50th anniversary of Bangladesh-Brazil diplomatic relations and congratulated the Brazilian as they are celebrating the 200th years of the independence of Brazil. More than 100 guests comprising members of the diplomatic corps, academics, journalists, businessmen and high-level Brazilian government officials attended the reception.