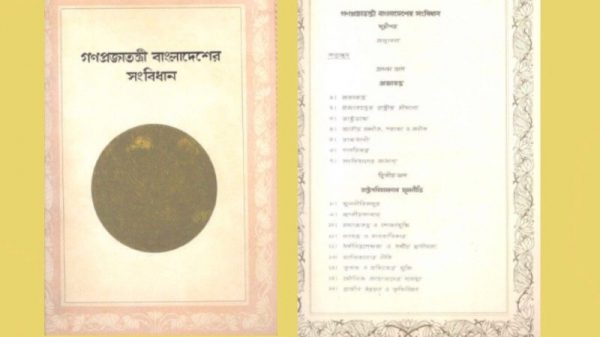 Marking the day, the National Committee for Restoring the 1972’s
Constitution will organize a discussion at the Bangladesh Shilpakala Academy
at 4.30pm tomorrow.

After the country achieved independence following a nine month-long bloody
war, a 34-member Constitution Drafting Committee was formed with Dr Kamal
Hossain as its chairman on April 11 in 1972.

The draft constitution was placed as the Constitution Bill in the second
session of the Assembly on October 12, 1972. Its first reading began on
October 19 and continued till October 30. The second reading took place from
October 31 to November 3 in the same year.

Taking part in the discussion on Constitution Bill, Father of the Nation
Bangabandhu Sheikh Mujibur Rahman had said, “This Constitution has been
written with the blood of the martyrs, this Constitution will remain alive as
the symbol of the people’s hopes and desires”.

Though the original copy of the Constitution was written in English, it
was simultaneously translated into Bangla. If any ambiguity is found in the
meaning of Bangla and English versions, the Bangla version will be accepted
in this regard.

A committee led by Dr Anisuzzaman was tasked for reviewing the Bangla
version of the Constitution. Syed Ali Ahsan and Mazharul Islam were members
of the committee as the language experts.