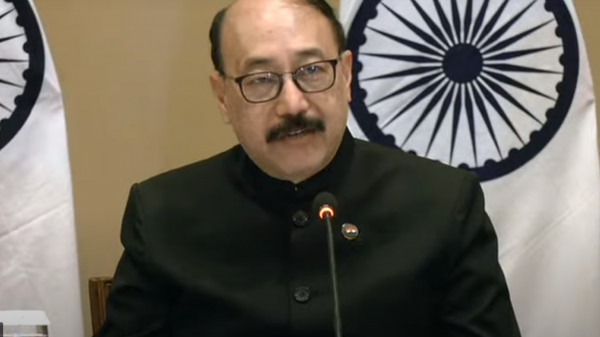 Indian Foreign Secretary Harsh Vardhan Shringla on December 15 2021 said Bangladesh and India have reached the high point of relationship while New Delhi never sees Dhaka through the prism of other countries.

“We have reached high point of our relationship,” he told a media briefing hours after Indian President Ram Nath Kovind held talks with his Bangladesh counterpart M Abdul Hamid while Prime Minister Sheikh Hasina called on him on the first day of his three-day visit.

He said Bangladesh and India made exponential increase in bilateral ties and achieved “incredible success” in resolving “intractable issues in most amicable manner”.

“In (next) 10 years you will see very changed countries (Bangladesh and India) . . . the cooperation we have is very important,” he said adding “we both are aspiring nations”.

Shringla, who previously served as Indian high commissioner in Dhaka, said New Delhi was looking for collaboration in cutting edge issues like green technology, renewable energy, IT and digital platform to create employment opportunities for youth.

“Certainly we are looking to the future as per as the next 50 years concern… we are looking at dynamic growth,” the top bureaucrat of India’s foreign office said.

Asked for comments about increased Chinese involvement in Bangladesh, Shringla said Dhaka-Delhi ties were unique which was not comparable with bilateral relations between any other countries.

“Our ties are unique . . . we don’t look at what relationship are (Bangladesh has) with other countries when we are celebrating uniqueness of our own relationship with Bangladesh,” he said

Asked what would be India’s response if Dhaka decided to join the Quadrilateral Security Dialogue (QUAD), a strategic platform of the United States, India, Japan and Australia, Shringla said, “it is sovereign decision of   Bangladesh”.

“The nature of Qaud itself is to work with other countries in partnership and that partnership, Bangladesh is an important partner,” he said.

The Indian foreign secretary said Indian president discussed broad ranges of bilateral relationship with spirit of 1971 and legacy of Bangabandhu during his meeting with Bangladesh premier today.

Replying a question on boarder killing, the foreign secretary said the highest level of the two countries leadership was sincere to ensure a peaceful frontier.

He told the newsmen that India’s Border Security Force’s (BSF) director general was scheduled to visit Bangladesh on December 19 next to discuss the issue.

About the tentative Bangladesh’s Prime Minister visit to India at the invitation of her Indian counterpart Narendra Modi, made March last, Shringla said, both the countries were working to find a date convenient for both the sides through the diplomatic channel.

Bangladesh rolled out a red carpet to welcome the Indian President, his wife Savita Kovind and daughter Swati Kovind along with an official delegation as he arrived here this morning on a three-day visit.

On Thursday, on the second day of the visit, the Indian president will join as the “Guest of Honor” the National Parade Ground function on December 16 to mark the golden jubilee of the Victory Day of Bangladesh.

In the afternoon, Kovind will take part in a function titled “Great Victory Heroes” in the South Plaza of the Jatiya Sangsad Bhaban to pay
respect to Bangladesh’s Father of the Nation and to celebrate the joy of victory.

On the third day of his visit on December 17, the Indian president is scheduled to inaugurate and inspect the newly renovated section of Kali
Temple.