Bangladesh may enjoy the TRIPs waiver facility even after LDC graduation 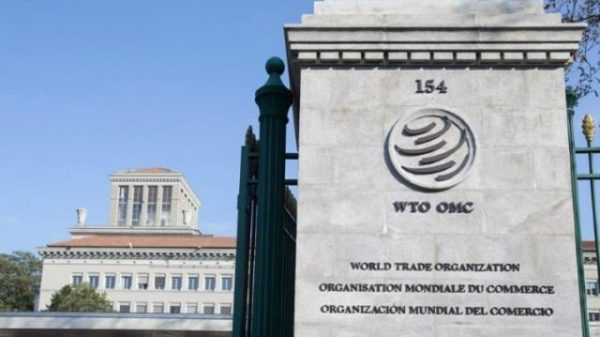 Bangladesh may enjoy the TRIPs waiver facility even after LDC graduation

Bangladesh is likely to enjoy the benefit of the waiver of Trade Related Aspects of Intellectual Property Rights (TRIPs) in patent rights in genetic medicine for a certain period as the World Trade Organisation (WTO) Ministerial adopted this issue in its declaration.

“An eligible member may apply the provisions of this Decision until 5 years from the date of this decision. The general council may extend such a period taking into consideration the exceptional circumstances of the COVID-19 pandemic,” said the 12 the Ministerial Conference (MC12) of the WTO declaration.

“The general council will review annually the operation of this decision,” the declaration document said.

The WTO conference was held in Geneva, Switzerland, from 12 to 17 June 2022. Initially scheduled to end on 15 June, the ministerial gathering was extended by two days to allow more time for negotiations and reaching agreements.

Bangladesh along with other Least Developed Countries (LDCs) were lobbying under the WTO initiative over the last two years for the extension of the trade benefits for six or nine years for the graduating LDCs.

Because of the adoption of this clause, Bangladesh has the opportunity to enjoy the LDC trade benefit even after the graduation to a developing country in 2026 although further negotiation is required, as the declaration does not specified yet but the paragraph of the benefit is included in the declaration.

For instance, the WTO in its declaration said “In this difficult context, we note with satisfaction the progress achieved by LDC members who have met or who are about to meet the graduation criteria set by the United Nations Committee for Development Policy (CDP) and acknowledge the particular challenges that graduation presents, including the loss of trade-related international support measures, as they leave the LDC category.”

“We recognise the role that certain measures in the WTO can play in facilitating smooth and sustainable transition for these members after graduation from the LDC Category,” the declaration added.

This indicates that the eligible country including Bangladesh may enjoy the TRIPs waiver facility for five more years.

The TRIPs waiver facility of Bangladesh was supposed to come to an end with the LDC graduation in 2026 but the waiver benefit is brighten further from the declaration.

Bangladesh may also be benefited from the E-commerce business as the declaration also included this issue.

For instance in an agreement made in 1998, levying on import of e commerce products was prohibited.

However, it is noticed that Bangladesh loses more than US$6.0 billion worth of business in a year because waiver in duty on e- commerce. Bangladesh will be benefited because of adoption of e-commerce issue.

In the fisheries subsidies the WTO agreed to stop subsidies on the harmful fishing. However, the graduating LDCs including will be able to subsidise for seven years.

But in case of Bangladesh this is not too much related as most of the fishing takes place in inland, not the marine fishing. The reduction of fisheries subsidy is mainly related to the marine subsidy.

The WTO declaration said after an intense negotiation for nearly six days and nights the 164 member countries of the WTO could reach consensus on major global issues to facilitate the growth of trade.

The conference could reach consensus on the issues like WTO response to Covid 19 pandemic and preparedness of the future pandemic.

The WTO in its ministerial declaration also said they could reach consensus on the issues like food security, exemption of the World Food Programme from food purchase during the emergency, e commerce, TRIPs waiver and fisheries subsidies.

In the declaration the WTO members also agreed to extend the trade benefit to the LDCs and graduating LDCs, although it was not specified yet how long and how the benefit would be delivered to the benefiting countries.

Round-the-clock negotiations among delegations produced the “Geneva Package”, which contains a series of unprecedented decisions on fisheries subsidies, WTO response to emergencies, including a patent waiver for COVID-19 vaccines, food safety and agriculture, and WTO reform, said WTO Director-General Ngozi Okonjo-Iweala in her statement.

“The package of agreements you have reached will make a difference to the lives of people around the world. The outcomes demonstrate that the WTO is, in fact, capable of responding to the emergencies of our time,” Ngozi Okonjo-Iweala said.

“They show the world that WTO members can come together, across geopolitical fault lines, to address problems of the global commons, and to reinforce and reinvigorate this institution,” the WTO DG added.

Talking to BSS, Debobrata Chakrabarty, commercial counsellor of Permanent mission of Bangladesh to Geneva, said about 80 per cent of the proposals were accepted at this year’s conference.

He mentioned that the agreement of fisheries would be helpful for Bangladesh like other developing countries as there is a peace clause for them.

Under this clause, he said, the countries would enjoy some relaxed benefit to get rid from dispute resolution.

Decision in TRIPs waiver is also helpful for developing countries as production of vaccine would be facilitated with patent relaxation, he added./(BSS)