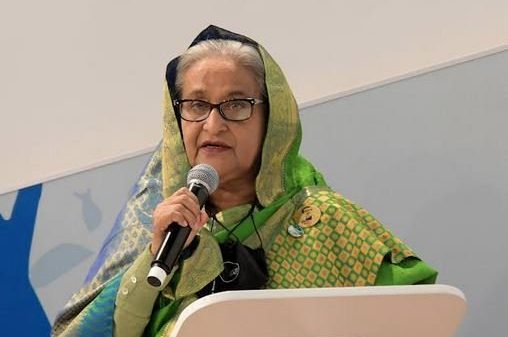 Prime Minister Sheikh Hasina today demanded rich countries immediate recognition to the vulnerable nations’ needs for finance to face climate change onslaughts particularly because 48 poorer territories are exposed to worst despite their only five percent contribution to the global emission.

“We, the 48 members of the CVF (Climate Vulnerable Forum), account for only 5 per cent of the total global emission,” she told a “CVF-Commonwealth High-Level Panel Discussion on Climate Prosperity Partnership” on the COP26 sidelines as the chief guest of the event.

But, the Bangladesh premier said, the adverse impacts of climate change “posed fundamental threats to our lives and livelihoods” which could be negated by adequate and promised financing alongside technology transfer by richer nations.

“Our (CVF nations) vulnerability and necessity for adequate climate finance and technology transfer must be recognized by the international community,” Sheikh Hasina said.

Sheikh Hasina said the major emitting countries need to fulfil “their obligations to support us in our efforts to cope with the effects of climate change”.

The premier said a common position of the climate summit could “help us in securing the annual 100 billion dollar for climate financing” by the developed countries for the developing ones, “as promised in Paris Agreement”.

She said the climate financing must has to be in addition to the existing and future ODA or overseas development assistance and “this amount should be allocated with the ratio of 50:50 between adaptation and mitigation” for the greater benefit of the vulnerable countries.

Sheikh Hasina is the incumbent chair of the CVF which unites developing nations from Africa, Asia and Latin America while the grouping wants countries to ramp up their plans for emission cuts at every annual UN climate summit through to 2025.

The CVF campaigns for striving harder to meet the 2015 Paris Agreement goal to limit global warming to 1.5 degrees Celsius this century.

But close to 50 of 190 countries which signed the accord are yet to submit new or updated emissions reduction goals and among those who submitted their plans, a few large emitters show low – or no – fresh ambition.

Sheikh Hasina said Bangladesh is often referred to as the “Ground Zero” for adverse impacts of climate change and “despite our vulnerabilities and resource constraints, we have adopted exemplary initiatives to tackle climate change” and submitted an ambitious and updated NDC to the UNFCCC.

The Bangladesh premier asked the COP26 to find pragmatic, inclusive and locally-led solutions alongside a joint move of CVF and the Commonwealth countries to implement the Paris Agreement in tackling the climate change onslaughts.

Sheikh Hasina reminded the global leaders that climate Change is a global and cross-border issue now and no country is immune from its “grave consequences” while the COVID-19 pandemic proved the crucial need for effective cooperation and collaboration for robust, bold and responsive actions of all.

But, she said, the increased number of climate disasters and their impacts brought the most vulnerable countries at a tipping point of unalterable damage, which were “affecting global food, energy, health and economic securities”.

The premier said the recent Intergovernmental Panel on Climate Change (IPCC) report gave a clear message that all have to take urgent and decisive actions to save the planet and the future generations.

The United Nations earlier said the world has already heated up by just over 1C from preindustrial times and is set for warming of close to 3C, even if emissions-cutting pledges made so far are delivered.

Sheikh Hasina pointed out that over one-third CVF member states were members of the Commonwealth, which, she said had a history of commitment and contribution in addressing climate change challenges.

“I firmly believe that the joint efforts of the CVF and the Commonwealth members can act as a catalyst for implementation of the Paris Agreement,” Sheikh Hasina said putting forward some proposals for Commonwealth-CVF collaboration towards that end.

Under the proposals she sought increased knowledge sharing, research and capacity building and technology transfer among them for achieving sustainable, green and nature-based solutions for our prosperous future.

She said the climate change intensified climate migration phenomenon forcing people to move away from their ancestral homes and traditional jobs due to sea-level rise, increasing salinity, river erosion, floods and draughts.

“There has to be global responsibility for rehabilitation of these people.”

Sheikh Hasina said the united actions of particularly the CVF nations could act as a force for the major emitting countries to declare their ambitious and aggressive NDCs to keep the global temperature rise at 1.5 degrees.

She said clean and green technology transfer to developing countries at affordable costs, including for meeting energy requirements, was very important as the development needs of the CVF, and the Commonwealth members were needed to be taken into account.

“Finally, together we must try to find out pragmatic, inclusive and locally-led solutions to tackle climate change,” she added.

The Prime Minister also mentioned that Bangladesh has launched the “Mujib Climate Prosperity Plan” to transform its climate vulnerability into climate prosperity by following a low-carbon development path.