“We’re even barred from seeking justice,” she said while UN High Commissioner for Human Rights Michelle Bachelet paid a courtesy call on her at her official Ganabhaban residence here.

The premier said Father of the Nation and then President Bangabandhu Sheikh Mujibur Rahman along with most of his family members were brutally assassinated on August 15 in 1975. 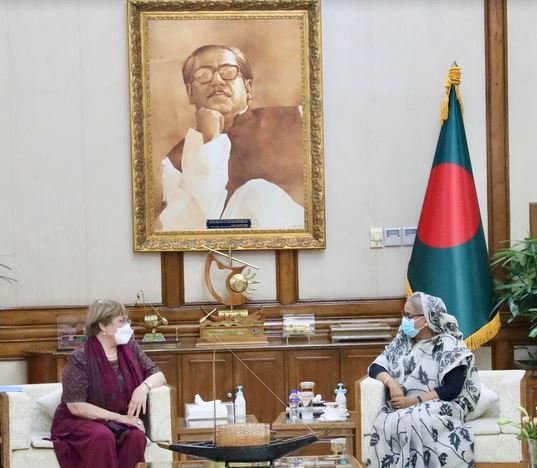 She added that she and her younger sister Sheikh Rehana survived the 1975 massacre as they were abroad at that time.

Sheikh Hasina said the then military backed government had enacted Indemnity Ordinance to stop trial of those killings.

After returning to country from forced exile, she said they were barred from seeking justice due to that ordinance.

She said the then military government even rehabilitated killers of Bangabandhu and war criminals in politics.

Bachelet, who was president of Chili for two times, said her family also had to suffer inhuman torture like Bangladesh Prime Minister when an oppressive government was in power in her country.

The UN high commissioner said she was “deeply moved” after visiting the Bangabandhu Memorial Museum where the Father of the Nation with most of his family members were brutally killed on August 15, 1975.

During the meeting, they discussed the current world issues and agreed that the ongoing Covid-19 pandemic, Russia-Ukraine war, sanctions and counter sanctions have created crisis across the globe.

On Rohingya issue, the prime minister said Myanmar doesn’t refuse that Rohingyas are their nationals but they are yet to respond to repatriate their displaced citizens.

Myanmar will has to bring their nationals back to their country, she said.

She also said Bangladesh never wants war with anyone.

Referring to the Chattogram Hill Tracts (CHT) peace treaty, she said 62,000 refugees had returned to Bangladesh while 1800 arms cadres had surrendered after that deal.

The premier replied that they can arrange those scopes for Rohingyas in Bhashan Char.

The UN high commissioner said the UN is working with the law ministry on the Digital Security Act and gave some observations to this end.

Sheikh Hasina said she knew the matter and added that Bangladesh would not allow anyone to use its soil for terrorism.

She briefly highlighted the government measures taken for overall development of Bangladesh.

She said the Padma Bridge contributes to development of southern people of the country.

“We are laying emphasis on agriculture for country’s development while we are establishing agro processing industries,” she added.

The prime minister also said over 1.87 lakh families have got houses free of costs under Ashrayan projects as the government is working to bring every homeless and landless people under the housing scheme.

She also greeted the premier for graduating Bangladesh to a developing nation from a least developed one.

Both of them also discussed the climate change impact.

The premier said they stressed aforestation in coastal regions as they are vulnerable to climate change.