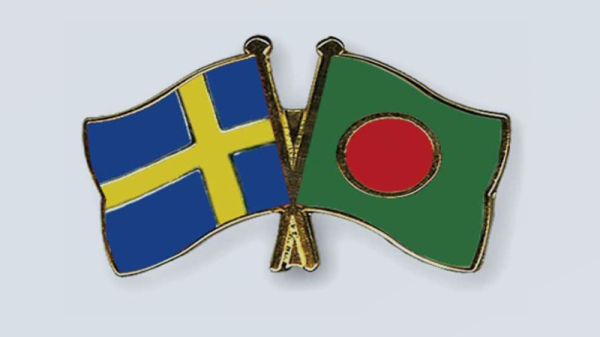 Foreign Minister Dr A K Abdul Momen and his Swedish counterpart Ann Linde agreed to strengthen and expand cooperation to combat climate change during a bilateral meeting held yesterday at Stockholm in Sweden on the margins of the Stockholm+50 International Meeting.

The Swedish Foreign Minister applauded Bangladesh’s leadership role in global climate change discourses, especially as CVF Chair under the leadership of Prime Minister Sheikh Hasina. Bangladesh Foreign Minister said that Ôwe have just passed on the Presidency of Climate Vulnerable Forum (CVF) – an alliance of 55 climate vulnerable nations- to Ghana. However, we will continue to promote the interests of the vulnerable nations as part of the TROIKA of CVF.Õ

During the discussion, Foreign Minister Momen highlighted the plights of displaced people of the coastal area due to sea-level rise. He added that this may be turned to be a security issue if the current trend continues. He sought Swedish assistance to enhance Bangladesh’s capacity to adapt to the adverse effects of the climate crisis. Minister Momen invited Sweden to build partnership with Bangladesh on further cooperation in climate adaptation, renewable energy, innovation, technology transfer and green growth.

Foreign Minister requested Sweden to enhance and diversify its climate cooperation with Bangladesh through GCF, Adaptation Fund (AF), and Least Developed Countries Fund (LDCF). He also stressed on the need for additional financing mechanisms for loss and damage. The two Ministers also underlined the importance of global cooperation for effective implementation of the Paris Agreement and agreed to work together to that end.

While emphasizing on the importance of trade and investment for a strengthened bilateral relation, Minister Momen urged Sweden to further diversify its exports beyond the traditional items and invest in the 100 Economic Zones that the government of Bangladesh has established.

Bangladesh Foreign Minister further sought Sweden’s proactive role in both bilateral and multilateral contexts in promoting the safe, dignified and voluntary return of the forcibly displaced Rohingyas to their homes in Myanmar at the earliest.

Foreign Minister Abdul Momen is on a 3-day visit to Sweden from 1-3 june to participate in the Stockholm+50 international environmental meeting, under the theme “Stockholm+50: a healthy planet for the prosperity of all – our responsibility, our opportunity.”