Bangladesh wants to contribute to betterment of global community: PM 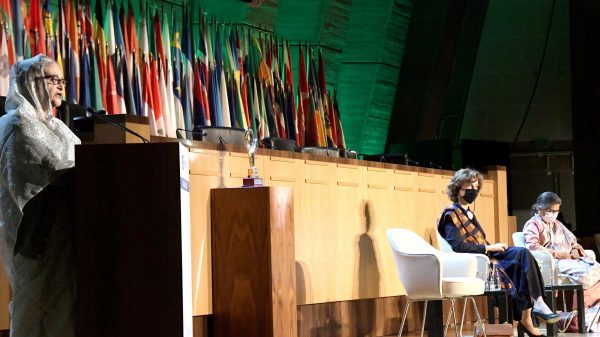 Bangladesh wants to contribute to betterment of global community: PM

Prime Minister Sheikh Hasina today expressed Bangladesh’s desire to contribute to the socio-economic development and technological advancement for the betterment of the global community.

Acknowledging the ‘kind support’ of the international community in the development of her country over the decades, she said, “We also wish to contribute to the socio-economic development and technological advancement for the betterment of the global community despite our limited capacity.”

The Prime Minister was addressing the UNESCO-Bangladesh Bangabandhu International Prize for the “Creative Economy” awarding ceremony at the UN body’s headquarters here.

“We believe that investment on the creative economy will result in realization of the collective aim of furthering socio-economic development and technological advancement,” she told the function.

The Prime Minister has announced the name of winner and handed over the prize and certificates to the recipient.

PM’s younger sister Sheikh Rehana was present on the dais.

Sheikh Hasina said she believes that establishing the UNESCO-Bangladesh Bangabandhu Sheikh Mujibur Rahman International Prize for the “Creative Economy” is the most befitting tribute to Bangabandhu’s contribution to the global humanity and peace.

She hoped that this international prize would strengthen the efforts of UNESCO (United Nations Educational, Scientific and Cultural Organization) in the field of creative economy, further contributing towards its global priority, that is, gender equality and the priority for youth as a group.

UNESCO Director General Audrey Azoulay, who received Sheikh Hasina with a flower bouquet on her arrival at the headquarters, delivered the welcome address at the function.

The Prime Minister said the UNESCO-Bangladesh Bangabandhu Sheikh Mujibur Rahman International Prize will surely create a knowledge-sharing mechanism by capturing, celebrating, and communicating the best practice in the development of creative entrepreneurship.

The Prime Minister conveyed her heartfelt appreciation and gratitude to the UNESCO personnel for their support in establishing the prize in the name of the Father of the Nation of Bangladesh which coincides with the International Year of Creative Economy for Sustainable Development declared by the United Nations.

“Bangladesh is privileged and honoured to join UNESCO’s effort in these areas of our priorities,” she added.

Sheikh Hasina expressed gratitude to the UNESCO for recognizing the 7th March Speech of Bangabandhu by including the speech in the Memory of the World Register as a documentary heritage on October 30, 2017.

The Prime Minister told the global gathering that due to Bangabandhu’s visionary leadership and legacy, Bangladesh is so different today from what it was during the early years of independence.

She added that this year Bangladesh is celebrating the golden jubilee of its independence that coincides with the ‘Mujib Year’, the birth centenary of the Father of the Nation Bangabandhu Sheikh Mujibur Rahman and UNESCO is officially associated with the celebrations.

She also saw the exhibition of recorded videos and photographs on the creative economic activities of the winners.

At the beginning of the programme, a brief description of the award was given while a video documentary on the award was also screened on the occasion.

Describing Father of the Nation Bangabandhu Sheikh Mujibur Rahman as a strong advocate of multilateralism, Sheikh Hasina said that he (Bangabandhu) treated the United Nations “as the centre of peoples’ future hopes and aspirations.”

“Bangabandhu had similar sentiments and attributes for UNESCO as a Specialized UN organ. As his elder daughter, I had closely watched him, and can confidently attribute Bangabandhu as a true advocate of UNESCO,” she added.

The actions of Bangabandhu Sheikh Mujibur Rahman toward promoting linguistic and cultural diversity and investing in peace are similarly central to all fields of UNESCO’s mandate, she opined.

Moreover, his policy decisions and establishing institutions in the field of education, culture, science and technology and leadership in establishing democracy as the cornerstone of governance in a newly-independent country are directly linked to UNESCO´s core objectives, she said.

Sheikh Hasina mentioned that Bangabandhu was awarded the Julio-Curie Medal for Peace in 1973.

The Prime Minister quoted from Bangabandhu’s speech while receiving the award – “World peace is the principle (objective) of my life. I am with the oppressed, the abused, the exploited, (and) the peace-loving, freedom-loving people, no matter where they are. We need peace in the world. Peace should be sustained. We believe in peaceful co-existence.”

She said that Father of the Nation Bangabandhu Sheikh Mujibur Rahman envisioned a ‘Golden Bangladesh’ economically self-reliant and free from hunger, poverty and illiteracy.

As he was moving towards the goal, the defeated and reactionary forces of the Liberation War brutally assassinated him along with 18 of his family members and close relatives, she added.

“It included my dear mother, three brothers with the youngest only 10 years old, and two daughters-in-law. Only my younger sister, Sheikh Rehana and I survived the carnage as we were away abroad at the time. We could not return home for six years and lived abroad as refugees,” she said in an emotion-charged voice.

After coming back home, she said, she devoted her life to fulfilling the vision of her father, the Father of the Nation, of a happy and prosperous “Golden Bangladesh”.
The Prime Minister said, immediately after the independence in 1971, Bangabandhu Sheikh Mujib made primary education compulsory and free for all. Bangabandhu believed that expenditure on education was the best investment and declared free schooling for girls up to grade eight, she added.

In a war-ravaged newly-independent country with many economic challenges, Bangabandhu nationalized over 36,000 primary schools and their more than one hundred 50 thousand teachers and employees across the country, she said, adding: “This simple example reveals his priority for education and a knowledge-based society.”

Following his footprints, the Prime Minister said, her government has given priority to education.

“We have established a primary school in almost every village. The number of pre-primary and primary schools in the country is now 1 hundred 33 thousand. Of those, 65,566 are government-run schools. Since 2010, free books, now numbering about 400 million copies, have been distributed among students up to secondary level. School lunches have been arranged for 2.9 million students in economically backward areas,” she said.

She added that more than 13.03 million primary students are supported by stipends. Stipend money goes to the mothers or legitimate guardians directly through their mobile phones.

Another 7 million students from secondary to higher education have been brought under various scholarships, she said, adding, “We have established the Prime Minister’s Education Assistance Trust for the management of the stipend and scholarships at secondary and college levels. “

The Prime Minister said they have also introduced Bangabandhu Science and Technology Fellowship for pursuing MS, PhD and postdoctoral studies and researches at renowned universities at home and abroad.

“So far, 580 scholars have been awarded with the fellowships spending about BDT 2 billion,” she informed.

“Moreover, we have established 20 new public technological and general universities in the country since 2009 raising the total number of public universities to 52,” she said.

Besides, as many as 105 private universities are offering higher education in the country and at present technical educational institutions are being opened in all 492 upazilas or sub-districts, she added.

“Enrolment in pre-primary and primary level increased to 99 percent. Female-male school enrolment ratio rose to 53:47 in 2017 from 35:65 in 2009. The increasing female education has significantly lowered the rate of child marriage,” she continued.

The Prime Minister said that the investment in education has started paying dividends as Bangladesh has made impressive progress in socio-economic fronts in the last one decade.

“During the period, per capita income tripled to US$ 2,554 and the poverty rate lowered to 20.3 percent from 31.5 percent. The infant mortality rate has reduced to 23.67 per 1,000; maternal mortality rate to 173 per 100 thousand live births; and the average longevity of people rose to 73 years. Bangladesh also graduated as a developing country from LDCs this year,” she said.