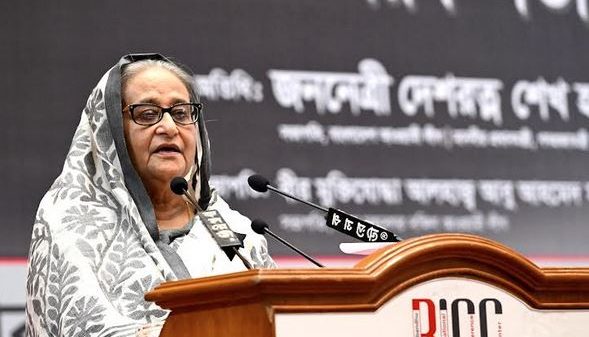 Prime Minister Sheikh Hasina today expressed her firm conviction that Bangladesh will never plunge into Sri Lanka-like situation for its development spree, rather the country will continue to move ahead overcoming all global challenges.

“Remember one thing (my party leaders and activists) that Bangladesh will never be Sri Lanka, can’t be . . .,” she said at a discussion as the chief guest.

The premier, however, said that Bangladesh had to face Sri Lanka-like situation in the regime of BNP, but Awami League (AL) government has pulled the country out of that state.

She added that, “Bangladesh’s economy came to standstill due to terrorism, militancy and corruption.”

The prime minister continued that people at that time (BNP’s regime) took to the street, actually they were compelled to come down on the street.

She went on saying that, “AL government has rescued the country from that state. So, why will Bangladesh become Sri Lanka today?”

The prime minister said her government is adopting development schemes in a well planned manner so the country’s economy keeps rolling, continuing its ongoing trend and moving ahead.

“We think in a pragmatic way before taking any development project. We think that what type of development will be in the country after implementation of the project,” she said.

She added that Sheikh Hasina doesn’t take any project in return for commission and it is the reality.

“My only thought is that what type of benefit the country and people will get from the development projects,” she said.

“We do such a plan, and we are taking the country ahead this way,” she also said.

Referring to beginning of Russia-Ukraine war before ending the adverse impact of Covid-19 pandemic, Sheikh Hasina said they have segmented the development projects into A, B, C and D categories in terms of budget allocation.

“We are allocating more funds to implement the project quickly which is necessary to complete fast so that the outcome of the project contributes to the economy and people get the benefit from it,” she said.

Similarly, the government has also categorized the projects which would not cause any loss for slow implementation, she said, adding, “We are taking each step in such a way.”

The head of the government went on saying, “Actually, we never eat borrowed Ghee”, adding in fact Bangladesh is not in a position that it will be trapped by anyone.

She said Bangladesh is repaying all loans on time whenever they borrow from someone but “we are doing it so carefully”.

Referring to AL’s 2008 election manifesto regarding electrification, the Prime Minister said since assuming power in 2009 after winning election their endeavor was to provide electricity to each house and they were able to do it successfully fulfilling their polls pledge.

But, the irony is that before the adverse impact of Covid-19 pandemic ended, a new hazard Russia-Ukraine war along with US sanctions appeared, she noted.

“I don’t know how much damage has the US sanction done to Russia, but it has affected the people of the whole world, even the US people too,” she observed.

She said each developed country in Europe and others are facing a crisis of electricity, and price hike of fuel oil and food which is hampering the daily life of the people of those countries.

She added that many countries across the globe are facing scarcity of foods and people are forced to cut down their daily meals to twice from three times.

In addition, the price of essential commodities and transportation cost has been hiked as well as people are rendered refugees as the outcome of this war and sanction, she said.

Sheikh Hasina said that they are also forced to increase the price of fuel oil to lessen the burden of subsidy and stop the smuggling of fuel oil to the neighboring country.

She said her government is continuing its endeavor to reduce the suffering of people and yesterday, after calculating some aspects, they cut the fuel oil price by Taka 5. “Our goal is to see the wellbeing of people,” she added.

She called upon the countrymen to become economical in using water, fuel oil and electricity stopping misuse of those.

Mentioning that big rivers across Europe are drying up which is hampering movement of ships, she said that it is signaling a famine in the world.

In this regard, the premier reiterated her call to all to produce whatever they can, making the optimum use of the country’s fertile land so that the global recession cannot impact Bangladesh.

Regarding the severe flood in Pakistan, she said that Bangladesh will send relief aid to the victims of floods in Pakistan’s Baluchistan.

Sheikh Hasina said, “There is a severe flood in Pakistan’s Baluchistan. I’ve already directed the officials concerned to see what will be needed there, the children are in great distress. I’ve already ordered to make arrangements for food and what can be provided to them. We will send them relief.”

She said, “We’ve won the war, as such we’ve a responsibility towards them. We’re following that. Father of the nation taught us this. Therefore, we are at the service of society and humanity.”

“She (Khaleda Zia) has been shown much kindness. It is not possible to show more compassion toward her,” she said.

About the BNP’s demand to send her abroad for treatment, she said there is no limit to their sloppy demands.

The Prime Minister said that she showed kindness to Khaleda Zia and created scope for her to stay home, by applying the premier’s executive authority considering that the elderly person was sick and facing troubles in jail.

She questioned if there is any such instance in any country in the world regarding a person who was in jail being convicted for embezzling money of orphans.

Sheikh Hasina criticized Khaleda Zia for patronizing the killers of Father of the Nation and his family members, attempts to kill Sheikh Hasina time and again and insulting her during the death of Koko.

She said that Khaleda Zia made her parents’ killers – Col Rashid and Huda – members of parliament (MPs) through the voter-less election held in February 15, 1996.

Referring to the remarks the BNP chairperson made before the August 21 grenade attack, she said Khaleda Zia commented that Sheikh Hasina would never become the opposition leader let alone the prime minister. “But now she (Khaleda) could become nothing. It is the reality,” she added.

Before Kotalipara bomb plot in 2000, the BNP leader also remarked that Awami League wouldn’t be able to come in power even in 100 years, she mentioned.

“There is no doubt that they were behind all bomb plots in the country,” said Sheikh Hasina.

She questioned why they (BNP government) didn’t allow the trial of the August 21 grenade attack, destroyed all evidences and staged “George Miah” drama.

“Now, how can they seek so much compassion from us after such happenings? It is my question. Time and again they wanted to kill me. Even then I show compassion (to her),” she continued.

Sheikh Hasina said she rushed in to console Khaleda Zia after the death of her younger son but she was insulted by not allowing her to enter her house. The door was closed when she reached there as per the schedule fixed earlier, she added.

“The door was closed before me. I was not allowed to enter. What a humiliation?” she said, citing that the incident reminded her that Khaleda Zia along with her husband used to go to her (Hasina’s) house after every one or two months and couldn’t sit in chair in many times rather had to sit in cane-made stool there.

“But, now I would not be allowed to enter. The gate was closed as soon as my car stopped there,” she said, recalling her memory of that time.

The premier said even after such an insult, now she would have to show kindness to her (Khaleda). “I have already shown compassion. How much kindness will I show to her who wanted to kill me?” she said.

She said Khaleda killed thousands of Awami League activists and tortured them for day after day.