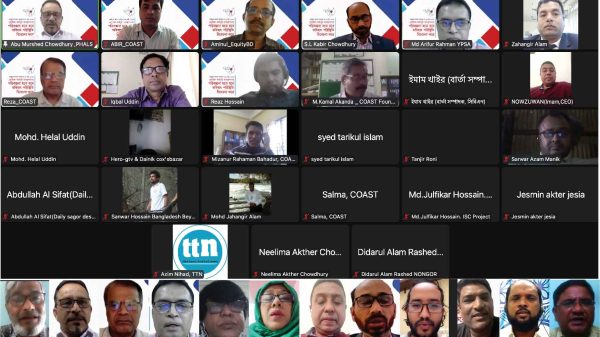 Today, the Cox’s Bazar Civil Society and NGO Forum (CCNF), a network of local NGOs and CSOs, held a virtual press conference demanding transparency, local government participation in the Rohingya response management. CCNF leaders also demanded a parliamentary caucus on the issue. They have also urged a ban on plastic, not using groundwater, limited use of bamboo in the Rohingya response. Abu Morshed Chowdhury of PHALS and Rezaul Karim Chowdhury of COAST Foundation moderated the press conference. Mr. Hamidul Haque Chowdhury, Chairman of the Ukhiya Upazila Parishad, was present and spoke as the Chief Guest.

Mr. Arifur Rahman of YPSA said that, in respect of coordination in ISCG (Inter Sectoral Coordination Group), RRRC (Refugee Relief and Repatriation Commissioner) and Deputy Commissioner should act as Chair and Co-Chair. Mr. Imam of Nowzowan demanded that, in respect of joint need assessment, local organizations should also be involved. Mrs. Neelema Akter Chowdhury of Agrajatra said that, government contribution should be recognized in joint response management, as the government has already made $400 million investment in Bashanchar, the government has contributed not less than billion $. Mr. Rashed of Nongar, demanded the use of Bangla language in all communication in respect of response management in Coxsbazar.

Mr. Nazrul of BAPA (Bangladesh Poribesh Andolan) stated that there is a lot of plastic and other waste in the Rohingya camp, and NGOs should be creative in this regard to innovate alternatives, surface water should be preserved and used, groundwater extraction should be stopped now. he also opined that a water treatment plan to bring water from the Naf River should be installed. Agrajatra’s Mr. Helal advised all concerned to buy dried fish and salt from local producers to distribute in the camps. Mukti Cox’s Bazar’s Mr. Lutful Kabir Chowdhury repeated the Grand Bargain’s call to channel 25% of funds through local and national NGOs.

Abu Morshed Chowdhury of PHALS urged that the joint response plan should be a live document so that local organizations will have space to participate at any time, sectors should be reorganized so that local organizations will have leadership. Rezaul Karim Chowdhury of COAST demanded partnership policies from international actors aiming toward sustainable local civil society building in Cox’s Bazar, the partnership policy should be practiced in a transparent manner without conflict of interest. Local NGOs should be informed, of their weakness while they have not selected as a partner.

Mr. Hamidul Haque Chowdhury, the Chairman of Ukhiya Upazila Parishad demanded that all humanitarian agencies must take the participation of local government leaders during project preparation to implementation. He expressed concern about the increasing no. termination of locals from the jobs by humanitarian agencies. He urged for special parliamentary coccus on Rohingya response management.