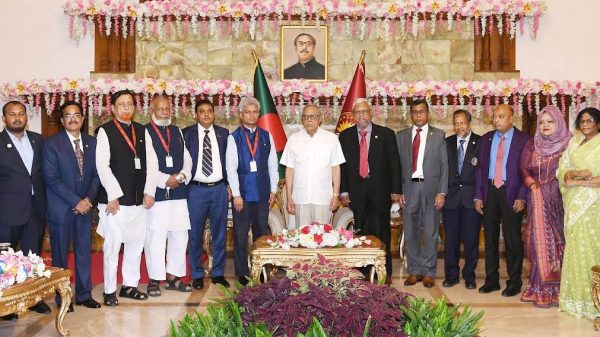 The BDRCS stood beside the Bangladeshi population throughout history and have played a crucial humane role in the relief, rescue and rehabilitation of hundreds and thousands of victims of flood, cyclone and other natural disasters in Bangladesh.

During the meeting, the President was apprised of the overall activities of the Society by its chairman and he sought President’s cooperation in discharging their duties.

The Head of State lauded the role of the Red Crescent Society in various humanitarian assistances during and post the natural disasters.

Bangladesh Red Crescent Society would continue its efforts in the service of humanity, he hoped.

Abdul Hamid asked the authorities concerned of BDRCS to ensure transparency and accountability in every activity of it.

The President also assured of providing overall cooperation in the development of Bangladesh Red Crescent Society.

Secretaries concerned to the Bangabhaban were also present during the meeting.