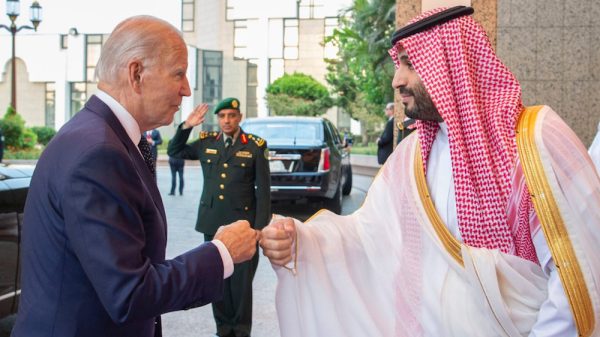 RIYADH: US President Joe Biden arrived in Saudi Arabia on Friday, the latest stop on his first Middle East tour as US leader, where he met with the Kingdom’s leadership.

In a speech made from his Jeddah hotel on Friday evening, Biden said he had held “important discussions” with King Salman and Crown Prince Mohammed bin Salman.

He praised the role the Kingdom played in the “stabilization” of Yemen and its support of a UN-brokered ceasefire, adding: “I agreed with the Saudi leadership to deepen and extend it.” 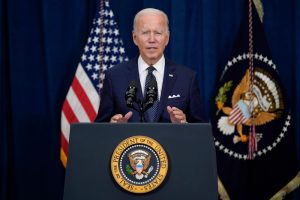 Biden announced that peacekeeping forces in Tiran and Sanafir will leave their positions, which he said would contribute to the development of the islands for investments and tourism.

He added that Saudi Arabia’s security needs and global energy issues were also discussed, including cooperation on clean energy initiatives.

Biden arrived at King Abdulaziz International Airport in the Red Sea port city of Jeddah on the third day of a four-day swing through the Middle East, where he was received by Makkah Gov. Prince Khalid Al-Faisal and the Saudi ambassador to the US Princess Reema bint Bandar.

He then met with the king, where they reviewed the historical relations between Saudi Arabia and the US and ways to strengthen them to serve the interests of the two countries in various fields, the official Saudi Press News Agency reported.

He spent the first two days meeting with Israeli officials and traveled to the West Bank on Friday to meet with Palestinian Authority President Mahmoud Abbas and others before flying to Saudi Arabia.

Biden also met with Crown Prince Mohammed bin Salman at Al-Salam Palace, where they also discussed aspects of bilateral cooperation in a number of fields, and ways to confront regional and international challenges.

The meeting was also attended by US Secretary of State Antony Blinken, National Security Adviser Jake Sullivan, and US envoy to Yemen Tim Lenderking.

Biden also will take part in a Saturday gathering of leaders from the Gulf Cooperation Council — Bahrain, Kuwait, Oman, Qatar, Saudi Arabia and the UAE — before returning to Washington. The leaders of Mideast neighbors Egypt, Iraq and Jordan are also to attend.

The Saudi leadership paved the way for Israeli planes to use its airspace by announcing it was lifting restrictions on “all carriers,” a move welcomed by Biden as “historic.”

“Saudi Arabia’s decision can help build momentum toward Israel’s further integration into the region, including with Saudi Arabia,” the US leader said.

Biden’s direct flight is the first by an American president from Israel to Saudi Arabia.