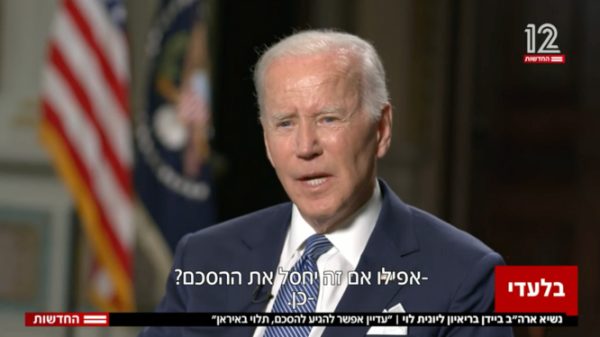 Using military force to deter Iran from acquiring nuclear weapons was not out of the question “if that were the last resort,” US President Joe Biden said on Israeli television on Wednesday.

The president, however, declined to say if he had any communication with Israeli leaders regarding possible military responses.

In an interview with N12, Biden said he was also committed to keeping Iran’s Revolutionary Guard on the US Foreign Terrorist Organization list even if that scuttled the nuclear deal between Iran and world powers.

Biden and Israeli Prime Minister Yair Lapid will sign a joint pledge to deny Iran nuclear weapons on Thursday, closing ranks after long-running disputes between the allies over global diplomacy with Tehran.

The United States and Israel have separately made such veiled threats against Iran – which denies seeking nuclear weaponry – for years. Formally articulating the rhetoric could enhance the sense of deterrence and mutual commitment to action.

“I think what you’ll see in the joint declaration is a pledge and a commitment never to allow Iran to acquire a nuclear weapon and that we’re prepared to use all elements of our national power to ensure that outcome,” one US official said.

Biden arrived in Israel on Wednesday in a regional tour which will also see him attend a GCC summit in Saudi Arabia.

When asked why his administration was so determined to resurrect the deal, which most US allies in the region oppose, Biden said: “The only thing worse than the Iran that exists now is an Iran with nuclear weapons.”
Blaming his predecessor Donald Trump for canceling the deal, Biden said Iran was now more dangerous as a result.

“They are closer to a nuclear weapon now than they were before,” Biden said.

In 2018 Trump withdrew the US from the Joint Comprehensive Plan of Action — signed in 2015 by Iran and the P5+1 group of countries China, France, Russia, the United Kingdom, the United States and Germany — because of Iran’s dangerous behavior in the Middle East. Most US allies in the region welcomed the move by the previous president.