Britain keen to work with Bangladesh on alternative energy 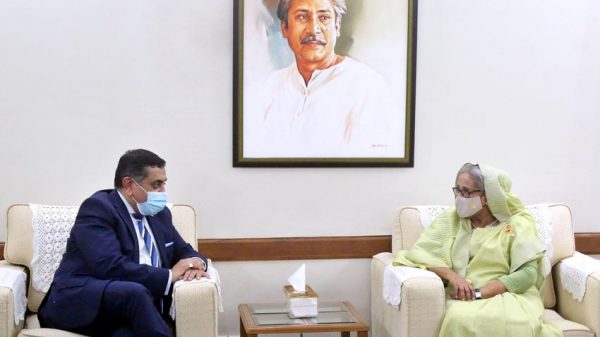 Britain keen to work with Bangladesh on alternative energy

The United Kingdom has expressed its keenness to work on alternative energy with Bangladesh.

UK Minister of State for South Asia, the United Nation and the Commonwealth of FCDO Lord Tariq Ahmad of Wimbledon expressed the desire when he called on Prime Minister Sheikh Hasina at her official Ganabhaban residence here this evening.

Prime Minister’s Press Secretary Ihsanul Karim told the newsmen after the call on.

During the meeting they also discussed various issues like climate, British-Bangladesh trade and Rohingya issues, he said.

Emphasizing on green energy the UK state minister said that the region has a great potential of green energy as Nepal and Bhutan have hydroelectricity.

He also said hydro electricity can be distributed through establishing a regional grid.

In reply, Bangladesh Prime Minister said, “We are working on it.”

As Tariq Ahmad stressed the need for solar energy, Sheikh Hasina said that Bangladesh has so far given 6.5 billion solar connections.

About the Rohingya issue the British Minister said that they want the Rohingya to return to their homeland Myanmar from Bangladesh.

He continued that he met many Rohingya refugees in Cox’s Bazar and said they highly lauded Bangladesh’s Prime Minister and the present government.

Sheikh Hasina told the UK minister that some Rohingyas have been sifted on an island.

The Prime Minister said that her government has taken measures to give them jobs, proper education and training to make them skilled as they will not be considered a burden when they are sent back to their homeland.

She called upon the international agencies to work for the Rohingyas upon taking them back to Myanmar.