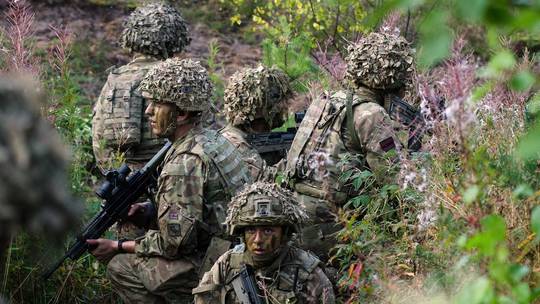 Warrant Officer Paul Carney advised troops to discuss a potential deployment with their families.
The UK’s top ‘other ranks’ soldier has said that British troops must be ready to fight Russia, and should prepare their families for the prospect of an “extended” deployment. His advice comes after the UK’s new head of General Staff said that British forces must become capable of “defeating Russia in battle.”

Writing for the latest issue of the British Army’s ‘Soldier’ magazine, Carney said that “the Army is shaping itself to meet the threat from Russia,” and “will be ready, with the right equipment, to play our part in deterring a future war in Europe.”

“Deterring” in this case seemingly means deploying. “I want us all to check we are physically fit for operations. And it is also important we prepare loved ones and families, who often have the hardest role in our absence,” he continued.

“My ask is that you have discussions about a potential deployment with them now…we could be out of contact for extended periods on tour.”

Carney’s warning does not signal an imminent change in the UK’s role in the conflict in Ukraine. However, a warning in June by Britain’s new chief of the General Staff, General Patrick Sanders, suggests that the Army views Russia as its next major opponent.

“There is now a burning imperative to forge an Army capable of fighting alongside our allies and defeating Russia in battle,” Sanders wrote in a letter to his charges. “We are the generation that must prepare the Army to fight in Europe once again.”

The UK has given Ukraine £2.3 billion ($2.7 billion) in military aid since Russia’s military operation began in February. British forces are currently training Ukrainian recruits in the UK, and its intelligence agencies are allegedly sharing information with their Ukrainian counterparts.

The UK is a member of the NATO alliance, and in the event that it became involved in open war with Russia, the bloc’s 29 other member states, including the US, would be obliged to enter the conflict.