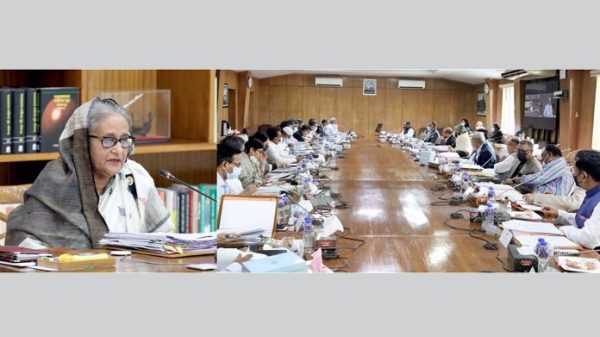 The cabinet today approved in principle the draft of the Drugs Act, 2022 intensifying the punishment for several anomalies and offenses to the maximum 10-year jail and Taka 10 lakh penalty.

The approval was given at the regular cabinet meeting presided over by Prime Minister Sheikh Hasina and held at the Bangladesh Secretariat.

The premier joined the meeting virtually from her official residence Ganabhaban, while her cabinet colleagues were present at the meeting room of the Cabinet Division.

Briefing the reporters after the meeting at Bangladesh Secretariat, Cabinet Secretary Khandker Anwarul Islam said the highest punishment of 10-year imprisonment, Taka 10 lakh penalty or both were kept in several sections of the draft law for the drug related anomalies and offenses.

In the existing law, there is a maximum three-year jail and Taka two lakh fine for the irregularities.

The offenses, for which the maximum punishment of 10-year jail and Taka 10 lakh fine were kept in the draft law, include producing or importing drugs without licenses; producing, importing, exporting, marketing, stocking, selling or showcasing drugs without registration; producing, selling, stocking or marketing adulterated drugs; as well as stealing and selling government’s drugs.

Besides, the meeting gave the final endorsement to the draft of the State Acquisition and Tenancy (Amendment) Act, 2022 bringing a minor change in the existing law to reduce the pending cases.

There is a provision for a tribunal in the law. At the district level, assistant judges or senior assistance judges can be given the authority to try the cases, while the district judges can act as the appeal authority until the formal tribunal is formed as per the draft law, said the cabinet secretary, adding that this minor amendment was brought.

The cabinet also approved in principle the draft of the National Industry Policy, 2022 with a view to accelerating the economic progress of Bangladesh through industrialization with the balanced use of local raw materials and resources alongside cashing the facilities of the 4th industrial revolution.

In addition, the meeting cleared the proposal for ratification of two agreements to be signed with Saudi Arabia and Serbia. The deeds are the agreement between Bangladesh and Saudi Arabia on cooperation and mutual assistance in customs matters, while the agreement between Bangladesh and Serbia over visa exemption for diplomatic and official passport holders.