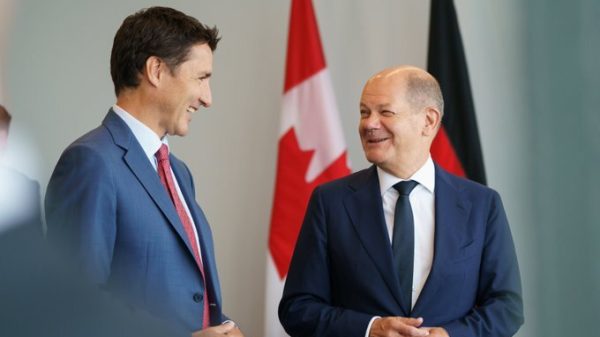 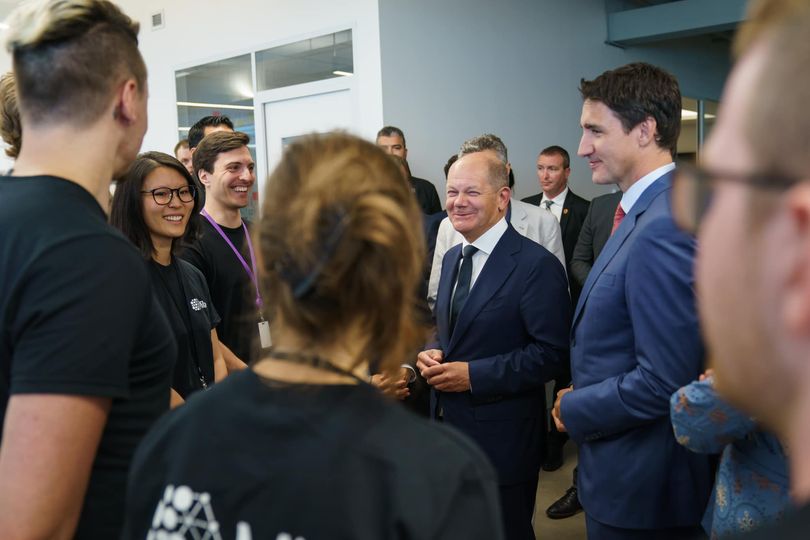 The Prime Minister, Justin Trudeau, welcomed the Chancellor of Germany, Olaf Scholz, to Canada from August 21 to 23 to further strengthen our close partnership.

With stops in Montréal, Quebec, Toronto, Ontario, and Stephenville, Newfoundland and Labrador, the two leaders worked together to make progress on shared priorities, including support for Ukraine, addressing the broader global impacts of Russia’s illegal invasion such as food security, strengthening bilateral cooperation on energy and leadership on climate action, promoting trade and investment that benefits everyone, and advancing the transition to the clean economy.

The two leaders then headed to Toronto where, on August 23, they addressed Canadian and German business leaders at the Canada-Germany Business Forum, to promote greater cooperation between their two countries in response to current global challenges exacerbated by Russia’s unjustifiable invasion of Ukraine, particularly energy and food security.

Both countries are committed to promoting electric vehicle uptake and advancing the transition to the clean economy. In Toronto, Canada signed two new Memoranda of Understanding (MOUs) with German automotive manufacturers Volkswagen AG and Mercedes-Benz AG to advance collaboration in Canada across the automotive, battery, and critical minerals sectors. Discussions with businesses and various stakeholders also took place with the goal to secure other key agreements to strengthen trade, science, and innovation and to create good jobs on both sides of the Atlantic.

To further promote innovation, the Prime Minister and the Chancellor launched a call for proposals for innovative small and medium-sized enterprises (SMEs) to support collaborative research and development projects, including in the areas of clean transportation, electric batteries, and quantum technologies. The call for proposals will be led by the National Research Council of Canada in collaboration with Germany’s Central Innovation Programme for SMEs.

The two leaders also welcomed the announcement that Canada has accepted Germany’s invitation to become a partner host country at Hannover Messe, one of the world’s largest industrial development and technology trade fairs, in 2025. This will be an opportunity for Canada to showcase its leadership in industrial and technology innovation and deepen collaboration with German and international partners.

During the Chancellor’s three-day visit, the two leaders reiterated Canada and Germany’s unwavering support for Ukraine’s sovereignty, territorial integrity, and independence in the face of Russia’s illegal and unjustifiable aggression.

While in Toronto, they jointly took part in the virtual Summit for Heads of State and Government of the International Crimea Platform, a Ukraine-led initiative aimed at enhancing international advocacy and responses to Russia’s illegal annexation of Crimea, which has deeper implications this year due to Russia’s unprovoked invasion of Ukraine.

In support of the Ukrainian government and people, Prime Minister Trudeau announced:

Canada also welcomed Germany leading, under the G7 RRM, a working group focused on the threat of subnational foreign interference at the community, municipal, and regional levels.

As the world continues to grapple with the far-reaching impacts of Russia’s invasion of Ukraine, Prime Minister Trudeau provided details on Canada’s $52 million contribution to the United Nations’ Food and Agriculture Organization (FAO) Grain Storage Support Strategy, which was first announced at the G7 Summit in Germany last June. This funding will help address ongoing grain storage shortages and strengthen food security by expanding storage capacity. It will help protect the livelihoods of thousands of farmers and indirect beneficiaries, including employment for internally displaced persons.

As Russia continues to weaponize energy, Canada is also working with its European and global partners, including Germany, to strengthen energy security and accelerate the clean energy transition. To encourage further progress in this area, the Chancellor concluded his visit to Canada on August 23 in Stephenville, where the countries signed a joint declaration of intent to establish a Canada-Germany Hydrogen Alliance. The proposed Alliance would help establish a transatlantic Canada-Germany supply corridor, with the target of beginning export by 2025. Prime Minister Trudeau reiterated Canada’s commitment to support Germany’s energy needs and looked forward to continuing to work hand-in-hand with Germany to take ambitious climate action.

In Stephenville, Prime Minister Trudeau and Chancellor Scholz also met with Premier Andrew Furey of Newfoundland and Labrador, Premier Blaine Higgs of New Brunswick, Premier Tim Houston of Nova Scotia, and Premier Dennis King of Prince Edward Island. Together, they discussed energy exports and the development of renewable energy in Atlantic Canada, and the region’s transition toward net-zero. The Premiers also signed a statement in support of the proposed Canada-Germany Hydrogen Alliance.

“Canada and Germany are close, like-minded allies and friends. We are united by our shared values, people-to-people ties, and commitment to building a clean future with good, middle-class jobs and a strong economy that benefits everyone. Chancellor Scholz’s first official visit to Canada was a successful one and we will continue to work closely together in many areas, including energy security and critical minerals, to build a better world for our children and grandchildren.”

The Prime Minister, Justin Trudeau, today participated in the virtual Summit for Heads of State and Government of the International Crimea Platform, where he announced new sanctions against supporters of the Russian regime, as well as additional assistance for Ukraine.

Chancellor of Germany Olaf Scholz, currently visiting Canada, also participated in this Ukraine-led initiative. The two leaders highlighted their solidarity and unwavering support for Ukraine and the Ukrainian people bravely defending their sovereignty, territorial integrity, and independence against Russia’s illegal and unjustifiable invasion.

To increase pressure on Putin’s regime, the Prime Minister announced that Canada is imposing new measures on 62 close associates of the Russian regime and a defence sector entity that is complicit in Russia’s invasion of Ukraine. Among the individuals sanctioned are high-ranking Russian government officials, including Russian federal governors and regional heads, their family members, and senior officials of currently sanctioned defence sector entities.

To support the Ukrainian government and people, the Prime Minister also announced allocation of  funding for two Ukraine projects through the Peace and Stabilization Operations Program (PSOPs), totalling $3.85 million. This funding will provide additional support to Ukraine’s security sector institutions and includes:

Today, Prime Minister Trudeau also announced that Canada will continue to counter Russian state-sponsored disinformation by creating a dedicated team to help increase Canada’s capacity to understand, monitor, and detect Russian and other state-sponsored disinformation and enable deeper international collaboration, including through the G7 Rapid Response Mechanism (RRM). Canada welcomes German leadership under the G7 RRM of a working group focused on the threat of subnational foreign interference at community, municipal and regional levels.

To respond to the urgent need to increase grain storage capacity in Ukraine due to Russia’s invasion, and help improve food security in the country, the Prime Minister announced at this year’s G7 Summit in Germany a $52 million contribution towards agricultural solutions. Canada’s contribution will be channelled through the Food and Agriculture Organization’s (FAO) Grain Storage Support Strategy. $50 million of that contribution will go towards grain storage solutions and $2 million will be dedicated for lab equipment and associated technical assistance. Canada’s support will benefit over 1,900 farmers and over 4,800 people overall, including by providing employment for, and protecting the livelihoods of, internally displaced persons in Ukraine.

“Canada and Germany continue to be united in our efforts to support Ukraine. Both countries reaffirmed our shared commitment to supporting the full restoration of Ukraine’s sovereignty, territorial integrity, and independence. We will continue to work together with our partners and allies to continue standing up for and defending peace, security, human rights, and the rule of law.”