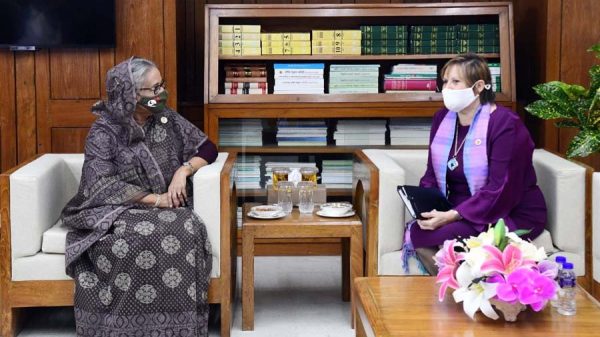 Prime Minister Sheikh Hasina today said the Rohingyas are creating social problems in Bangladesh as many of them are engaged in drug and women trafficking.

The Premier said this while newly appointed Canadian High Commissioner to Bangladesh Lilly Nicholls called on her at her Sangsad Bhaban office on June 19.

The Prime Minister said that over 1.1 million Rohingyas, forcibly ousted by Myanmar nationals, is a long time problem for Bangladesh.

“How long Bangladesh could bear such huge burden,” she said.

She also mentioned that the government has given temporary shelter to more than one lakh Rohingyas in Bhashanchar where they are getting better facilities of shelter.

The Canadian High Commissioner said that Canada will always support Bangladesh on this issue.

She also mentioned that her country is creating an additional fund through charity for Rohingyas.

The envoy is highly pleased to celebrate the 50th anniversary of the diplomatic ties between Bangladesh and Canada.

She also praised the golden jubilee of the Independence of the country and birth centenary of the Father of the Nation Bangabandhu Sheikh Mujibur Rahman.

Both discussed about the Russia-Ukraine War and agreed that war always causes sufferings to the people.

Both said that trade and business can grow further between the two countries.

In this regard, Sheikh Hasina said that Bangladesh looks forward for having more trade and investment with Canada.

In this connection she said that a large Bangladeshi diaspora in Canada is positively contributing to enhancing people to people contact between the two nations.

Congratulating the new envoy, the Prime Minister said that she expected that the High Commissioner would carry forward her efforts to strengthen existing excellent relations between the two countries and assured all possible support to her for discharging her duties in Bangladesh.

The Prime Minister said that since the Liberation War Canada has been supporting Bangladesh.

She also mentioned that during the COVID-19 pandemic Canada was always supportive and worked closely with Bangladesh.

“We have special relation with Canada,” she said.

She thanked Canada for donating COVID-19 vaccines and equipment.

The Prime Minister appreciated Canada, saying that the number of Bangladeshi students are increasing in Canadian Universities and requested the Canadian government to include Bangladesh in the Student Direct Stream programme.