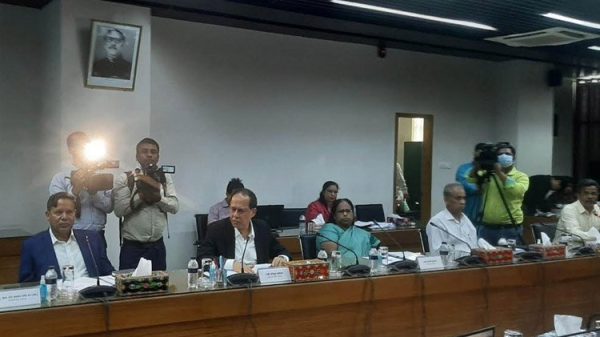 “The political parties should take responsibilities to prevent violence in polling areas because the political parties are the players in the voting field. They will play in the election fields while we will discharge our duties as referee,” he said.

He came up with the call while addressing a dialogue with the Nationalist Democratic Movement (NDM) at Nirbachan Bhaban in the city’s Agargaon area.

Addressing the representatives of the NDM party, Awal called upon the leaders and activists of NDM to give their best efforts to make the 12th general elections participatory.

Earlier in the morning, he said in his opening speech: “We have stated many times that it is very necessary for all the political parties, especially the major parties, to participate in the elections.”

The bEC cannot force any political party to participate in elections, he said, adding that however, the EC will repeatedly call all parties to participate and this effort will continue.

“If there is no rivalry and competition in the election, there is no accurate reflection of the public opinion,” he continued.

He said there is no constitutional bar to a single party which can form a government by winning 300 parliamentary seats in the polls.

But as per the history, he said democracy will embrace unnatural death soon in that case.

He added that dictatorship will be emerged further and the restoration of democracy will become tough.

“…We want to hold elections in a favorable environment and for this we need everyone’s support,” he said.
Awal urged the non-political and respected people to come forward and apply their wisdom and knowledge to call the political parties in the dialogues so that they could reach a political consensus in the upcoming elections.

On the first day, the EC held dialogue with the Nationalist Democratic Movement (NDM) or Jatiyatabadi Ganitantrik Andolan.