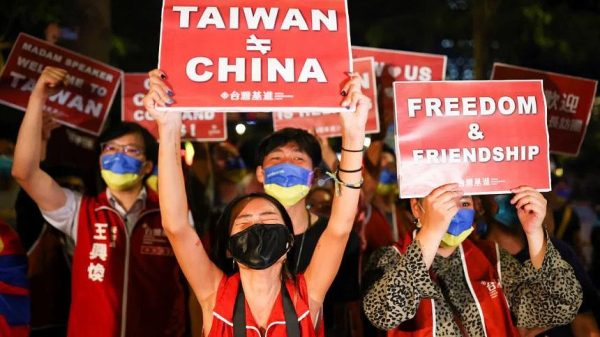 China also summoned the US ambassador in Beijing on Tuesday to rebuke him over House Speaker Nancy Pelosi’s “egregious” trip to Taiwan, state media reported.

Vice Foreign Minister Xie Feng voiced “strong protests” over Mrs Pelosi’s visit to the self-governing island, which China considers part of its territory, during his talk with Ambassador Nicholas Burns.

“The move is extremely egregious in nature and the consequences are extremely serious,” Mr Xie was quoted as saying by China’s state news agency Xinhua. “China will not sit idly by.”

Earlier, in a late-night statement sent out moments after Mrs Pelosi and her delegation disembarked in Taipei close to 11pm local time on Tuesday, China’s Foreign Ministry said: “(The visit) gravely undermines peace and stability across the Taiwan Strait, and sends a seriously wrong signal to the separatist forces for ‘Taiwan independence’.”

“China firmly opposes and sternly condemns this, and has made serious demarche and strong protest to the United States.”

The statement added that the visit would have a “severe impact” on the political foundation of bilateral relations, and that the executive branch, which includes the US President, had the responsibility to stop such a visit.

As the second in line to the American presidency after the Vice-President, Mrs Pelosi is the most senior US politician to visit the island in 25 years.

Beijing regards the self-ruling island as a breakaway province that needs to be retaken, by force if necessary.

While Washington does not have official diplomatic ties with Taipei, it is obliged by US law to provide the island with the means to defend itself.

China’s defence ministry called the visit a “malicious provocation” which would inevitably lead to “serious consequences”.

“The Chinese People’s Liberation Army is on high alert and will launch a series of targeted military operations to counter it,” said Ministry of National Defence spokesman Senior Colonel Wu Qian.

The Eastern Theatre Command said beginning Tuesday night it would carry out a series of joint military operations around the island that will involve long-range live ammunition, aimed as a “solemn deterrent”.

Shortly after the delegate landed in Taiwan, the PLA also announced a series of live firing exercises from Thursday to Sunday. A map released by the military marked out six areas around the island.

The planned drills would likely be the most assertive show of Chinese military power in the region since the Taiwan Strait crisis of 1995-96, when China fired missiles to intimidate the island and President Bill Clinton ordered aircraft carriers into the area.

The Taiwan Affairs Office of the State Council, China’s Cabinet, said the visit was made in bad faith and promised serious consequences.

“The motherland must be unified, and it is bound to be unified,” the TAO said in a statement, adding that it will neither be diverted nor swayed by “wishful thinking”.

Observers say this could mark a sharp deterioration in the already acrimonious bilateral relations, and it might be difficult for the relationship to bounce back.

“Distrust is at such a high level I’m not confident we could have convinced China this visit does not matter,” said Dr Bonnie Glaser, director of the Asia Program at the German Marshall Fund.

Mr Matt Abbott, director of the government and diplomatic programmes at the Chicago Council on Global Affairs, said it is also important to note that while a Speaker had previously visited Taiwan in 1997, the circumstances are now very different.

“The Chinese government is much stronger economically, militarily, and politically and is increasingly willing to be assertive with that power,” he told The Straits Times.