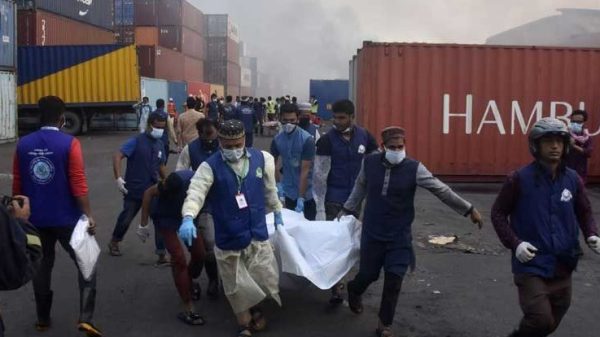 CHATTOGRAM, June 5, 2022 (BSS) – The death toll in the devastating fire that caused explosions at BM Container Depot in Shitolpur area of Sitakunda upazila in the district has climbed to 49.

Earlier, assistant director of the fire service Farooq Siddiqui said 45 bodies were recovered from the spot.

The local administration has been able to identify 21 bodies so far.

Over three hundred people, including police and fire service personnel were also injured in the incident, hospital sources said.

More than 300 injured people, of which many received burn injuries, are undergoing treatment in different hospitals in Chattogram, they added.

However, the actual number of injured people could not be verified independently.

A team of army personnel reached the depot to help bring the fire under control, he said.

ASI Talukder said 28 bodies were kept in the CMCH morgue.

The fire originated at the depot at about 9.35pm last night.

Police and fire service personnel were continuing their efforts to extinguish the flames and rescue people and send them to hospitals.

BM Container Depot Ltd is a Netherlands-Bangladesh joint venture, according to the police and officials of the depot.

Faruk Hossain Sikdar, assistant director of the Fire Service and Civil Defence, said that at least 20 units of the fire service were dispatched to the place of occurrence.

The fire service and civil defense personnel were unable to make headway despite multiple attempts were in place since this morning due to fire that is being fuelled by Hydrogen Peroxide, sources said. 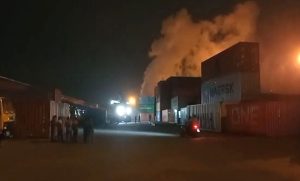 A Criminal Investigation Department (CID) experts’ team has started collecting DNA samples of the victims to identify the bodies of the Chattogram container depot fire incident.

The CID team started collecting samples from the relatives of the dead in front of the emergency department of Chattogram Medical College Hospital (CMCH), from this morning, Azad Rahman, additional superintendent of CID confirmed it to BSS.

Alauddin Talukder, Assistant Sub Inspector of CMCH police out post, said the relatives of 17 victims had come to provide samples. CID forensic team members are collecting the samples, he said.

The death toll in the devastating fire that caused explosions at BM Container Depot in Shitolpur area at Sitakunda upazila of the district has gone up to 49, an official said.

Among them a total of 23 victims have been identified and the rest will be identified after collecting samples from the relatives of the dead.

Alauddin Talukder said the death toll could rise further as few injured were severely burnt in the fire.

Meanwhile the fire at BM Container Depot, in Shitolpur area under Sitakunda upazila of the district is still not completely under control.

Ashraful Karim, Additional Superintendent of Sitakunda Circle, told journalists that there was no water left in the ponds surrounding the area of the depot to put out the fire.

The containers are being removed with the excavator and a path will be created as fire service personnel can supply the water to all the spots, he added.