Collective responsibility is crucial for implementation of the outcomes of COP26 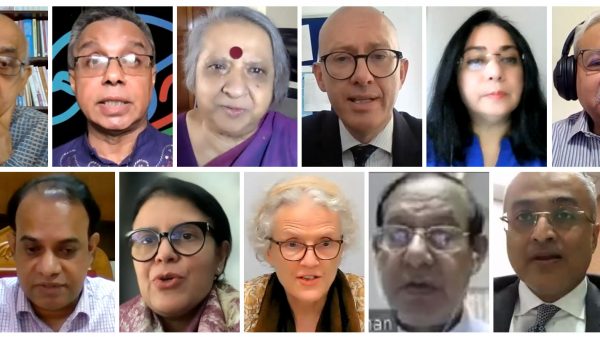 Collective responsibility is crucial for implementation of the outcomes of COP26

In less than two weeks, world leaders, government officials, negotiators, and representatives of the private sector and civil society organisations are going to attend the 26th Conference of Parties (COP26) of the United Nations Framework Convention on Climate Change (UNFCCC).

Dr Fahmida Khatun, Executive Director, CPD, and Professor Mizanur Rahman Khan, Deputy Director, ICCCAD made presentations at the dialogue. The study pointed out that, the least developed countries (LDCs) are the worst victims of climate change vulnerability. Moreover, the ongoing pandemic has put enormous pressure on climate vulnerable countries. In Bangladesh, annual average temperatures increased by 0.64 per cent in 2018, which was 10.20 times faster than the annual average temperature increase of 0.06 per cent in 1961. Due to flood, Bangladesh is expected to incur losses equivalent to 1.5 percent of gross domestic product (GDP).

In view of the critical consequences, Bangladesh has active interest in the outcome of COP26. Five specific agendas are critically important for Bangladesh. These are—first, ensuring the commitments of major carbon emitting countries to limit carbon emission; second, scaling up climate fund urgently to support climate vulnerable countries; third, ensuring the bigger share of climate fund towards adaptation; fourth, finalising the Paris Rulebook to ensure the accountability; and fifth, establishing the mechanism for loss and damage. The upcoming climate summit is going to be a defining moment for the world leaders. How they are going to implement the commitments of the Paris climate agreement are to be seen following the COP26, said Dr Fahmida while presenting at the dialogue.

The report also recommended that the vulnerable countries like Bangladesh have to ensure the investment in renewable energy and energy infrastructures. Considering that the challenges are manifold, the study proposed a collaborative action of all countries to produce an ‘Adaptation Communication’. “There is a huge gulf between the claimed delivery and the actual receipt, and the mitigation and adaptation ratio is still not improving”, Professor Mizan mentioned in his presentation. The study also pointed out that the European Union (EU) is the largest contributor in terms of climate finance. He also raised a question whether or not the UK-led COP26 would be able to change the game.

Khushi Kabir, Member, CPD Board of Trustees and Coordinator, Nijera Kori, moderated the session. In her introductory remarks, Khushi Kabir said, climate change is a reality for Bangladesh as well the whole world. “When we talk about progress, sustainable development and poverty reduction, discussion on climate change needs to be voiced which is a pressing need,” she said.

H E Charles Whiteley, Ambassador, Head of Delegation, Delegation of the EU to Bangladesh was present as the Guest of Honour. While thanking CPD and ICCCAD for arranging the dialogue, he commented that many of the points featured in the study show a high degree of commonality with Bangladesh’s activities on climate change adaptation. The EU has already submitted their nationally determined contribution (NDC) emphasising 55 per cent greenhouse gas (GHG) emission reduction by 2030. He felt that the private sector has a bigger role to play in tackling climate change.

One of the distinguished panelists Md. Ziaul Haque, Director, Dhaka Region, Department of Environment, Ministry of Environment, Forest and Climate Change, GoB, focused on three critical issues—one, to keep the global 1.5 degree temperature goal alive; two, to ensure that USD 100 billion is mobilised and allocated each year to the developing countries; and three, to operationalise the global goals adaptation. He mentioned that the mitigation ambition of Bangladesh has increased over the last years, and, therefore, the country has been planning for a long-term low emission strategy and is now pushing for having dedicated spaces to discuss the issue of adaptation at various levels. He mentioned that Bangladesh has already submitted its enhanced NDC, and it is expected that some concrete outcomes will emerge from the COP26.

Judith Herbertson, Development Director of FCDO Bangladesh, British High Commission highlighted two important issues—first, mitigation in line with the 1.5 degree global goal, and second, adaptation in concentration with protecting communities and natural habitats and accessing to the climate finance. Collaboration among the government, private sector and civil society is needed for finalising the Paris Rulebook. She also emphasised the need for assistance from financial institutions for sustainable climate financing in the context of COVID-19 pandemic as well as on the adaptation of a loss and damage mechanism. She also mentioned that the UK has committed to double its efforts to tackle climate change.

There is a distinctive gap between sourcing and sustainability, and there exists a dichotomy between commitment and commercial practices, said another panelist Dr Rubana Huq, Director, Bangladesh Garment Manufacturers and Exporters Association (BGMEA) and Managing Director, Mohammadi Group. She mentioned, BGMEA has already signed the UN fashion industry charter for Climate Action with UNFCCC to reduce industry emission by 2030. She emphasised the need for the collaboration among all stakeholders and more strategic actions from the end of the private sector for renewable energy use.

Panelist Dr Saleemul Huq, Director, ICCCAD, also put emphasis on the collective responsibility to tackle climate change. He mentioned that, on behalf of the climate vulnerable countries, Bangladesh has a big role to play. Agreeing with Dr Rubana, he opined that Bangladesh’s private sector has in fact a bigger role to contribute to address the climate issues. Regarding USD100 billion climate finance commitment, he said that the current demand for finance is at least USD 500 billion in five years. We should work beyond the COP26, he added.

Another panellist, Enamul Huque, Managing Director, Head of Corporate, Commercial and Institutional Banking, Standard Chartered Bank (SCB), discussed how commercial banks such as SCB are working on climate issues. He stated that SCB considers climate change as a huge challenge and SCB is committed to reach net zero carbon emission by 2030. Hence, it has designed procurement activities accordingly to achieve the net zero emission. He also mentioned various activities of SCB for green energy in Bangladesh.

Md. Abul Kalam Azad, Special Envoy, Climate Vulnerable Forum Presidency of Bangladesh was present as a Special Guest at the dialogue. Emphasising the need for reviewing NDC each year instead of five years, he mentioned that all countries should adhere to the Paris Rulebook. He said that the youth should be engaged in climate change related actions. He also felt that Bangladesh can raise its voice and call for regional collaboration and can monitor the mobilisation of climate fund of USD 100 billion.

Professor Rehman Sobhan, Chairman, CPD, chaired the session. He said that there exists some sort of asymmetry between individual responses and wider externality of the global system. He said, Bangladesh should focus more on its own individual strategies and fulfilling the commitments to achieve the goals at the national level, and that would automatically help the country achieve the global commitments as well. He further said, given that we have indigenised our priority concerns regarding development, the concept of vulnerability relates to individual lives, and therefore, climate is a class issue. Hence, there is a need for making the conferences and discussions more inclusive and the vulnerable groups who are worst affected must be integrated into the climate-related development priorities.