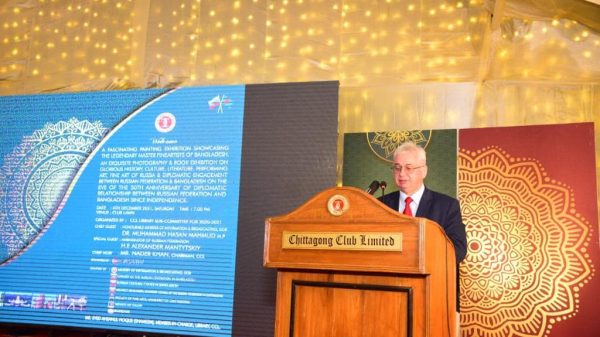 Consul of Russia in Chattogram celebrated 50th anniversary of diplomatic relations
Dhaka December 15 2021 :
On December 4 this year H.E. Ambassador Alexander Mantytskiy took part in a cultural program organized by the Honorary Consul of Russia in Chattogram, Ashiq Imran at the Chittagong Club on the occasion of the 50th anniversary of the establishment of diplomatic relations between Russia and Bangladesh in 2022.

Within the framework of the event, an exhibition of photographs of a special expedition Special Expedition-12 of the Soviet Navy, who conducted the operation for cleaning the port of Chattogram from mines and sunken ships in 1972-1974, of key events in the bilateral relations, works of the Russian fine art and literature as well as the exhibits by the local artists were presented

said a recent release of the embassy.
H.E. Alexander Mantytskiy in his speech expressed the hope for the further progressive development of mutually beneficial cooperation between the two countries, and noted the successes in the implementation of the legal framework laid down during the visit of the first national leader of Bangladesh Sheikh Mujibur Rahman to the USSR in March 1972.
In conclusion of the official part, a famous among the local public singer Mr. Neela Naz performed the song “A Million Scarlet Roses” by Alla Pugacheva in Russian.