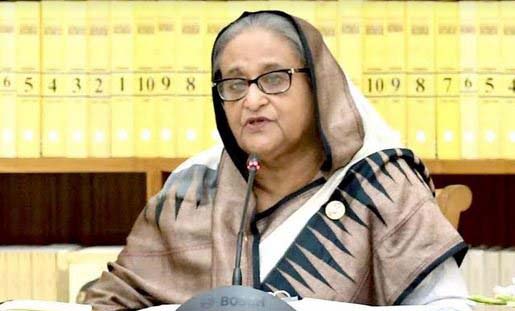 Prime Minister Sheikh Hasina today said that the country’s development spree might continue as Bangladesh has reached this position overcoming many setbacks.

“We’ve reached this position conquering many setbacks. (I want) this trend of development might be continued,” she said at her introductory speech at the regular meeting of the Executive Committee of the National Economic Council (ECNEC) at NEC Conference Room.

The premier joined the meeting virtually from her official residence Ganabhaban this morning.

Mentioning that she will not alive forever, Sheikh Hasina said “But, I want this development trend of Bangladesh should not  be impeded , and we might continue to move forward.”

She continued that the ideals have to be implemented on which Bangladesh was established and achieved its independence.

The Prime Minister said her government is working with some specific goals to ensure houses for all homeless people, food security, medical treatment facility and education etc.

“We’ve achieved success in all the fields, but we have to move ahead further,” she added.

The Prime Minister said Awami League (AL) and people of the country have trust and confidence on each other, and this is why it could work for the country and pulled it to the stage of developing country status.

“As people have their trust and believe on us and we also have trust and confidence on them, we could work and today Bangladesh got the recognition of the developing country,” she said.

She said AL formed the government through following democratic process and winning in the election by getting votes from the people.

As the government is in the power continuously, it helped it to pull the country forward and attain the developing country status, she noted.

“Whenever AL comes to  power, we always work for changing the fates of the people,” she said, adding, “Whatever the achievement we have, it is the contribution of the people and Bangladesh now stands in a position.”

Sheikh Hasina, the eldest child   of Father of the nation Bangabandhu sheikh Mujibur Rahman, said that she always follows the path and ideology of her father to work for the country and its people.

She continued that “We have taken short and medium, and five-year plan. We’ve implemented those. Apart from these, we have formulated long-term Perspective Plans, pin pointed the aim and advanced the country towards that.”

She also mentioned that the government has given its Vision-2021 in the 2008 election manifesto and implemented that.

In this connection, the premier extended her gratitude to everyone for their all-out cooperation to materialize the Vision and development plans that make the country a developing one in the time of celebration of the birth centenary of Father of the Nation Bangabandhu Sheikh Mujibur Rahman and Golden Jubilee of the country’s Independence.

“That is a great achievement for us, but we have to advance more,” she said.

To materialize the long term Perspective Plan, She said, the government has formulated the five-year plans to reach its goal gradually.

“For this achievement, Planning Commission has a great role,” she observed.

Mentioning that Bangladesh was in the era of darkness after the brutal killing of the Father of the Nation on August 15 in 1975, Sheikh Hasina said “There was no right of democracy and vote as the power was prisoned in the cantonment.”

“We had returned the rights of the people to them through our movement and struggle,” she said.

Talking about the August 15 carnage, in which she lost her father, mother, brothers and other close relatives, Sheikh Hasina said that it is impossible for her to accept this killing.

But, through the indemnity ordinance the scope to seek justice for the Killing was barred, she said.

She went on saying that “There was injustice and violation of human rights against us, I don’t know whether anyone recall that or not.”

Sheikh Hasina said she has witnessed the processes that how did Begum Khaleda Zia seat the killers in the Parliament through rigging the votes of people.

Besides, Ziaur Rahman awarded them (killers of Bangabandhu) giving jobs in Bangladesh embassies and missions abroad, she said.

Mentioning that her father has no properties except the capital of trust, faith, confidence on the people, she said “I’ve tried to go ahead with this capital keeping patience, even after enduring all injustices in the country.”