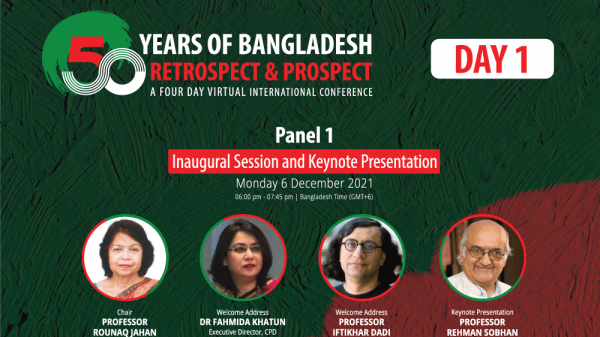 A virtual international conference titled “Fifty Years of Bangladesh: Retrospect and Prospect” kicked off on Monday for celebrating the golden jubilee of the independence of Bangladesh organized by  Centre for Policy Dialogue (CPD) and co-sponsored by the South Asia Program of Cornell University.

The conference aimed to explore the country’s developments in different sectors—politics, economy, society and culture.

A number of national and international webinars have already been organized this year on Bangladesh. They have portrayed the remarkable story of Bangladesh’s development—how it has succeeded in rebuilding a war-ravaged economy and society and made steady progress in key indicators of human development and economic growth.

Besides, for understanding Bangladesh’s multifaceted development over the last fifty years the event demonstrated specially commissioned papers, covering a broad spectrum of issues addressing the qualitative dimensions of development and change as well as explore the processes which have produced these changes.

Dr Fahmida Khatun, Executive Director, CPD in her inauguration remarks said that CPD is thankful to Professor Rounaq Jahan for conceptualising this conference and steering the organisation of the conference tirelessly for the last several months.

She said our deep gratitude to Professor Rehman Sobhan who has provided intellectual support and coordinated with the experts of the conference. I would also like to thank the members of CPD’s Board of Trustees, for their inputs during the design of the conference.

CPD’s research and dialogue divisions have provided excellent support for successful organisation of the conference. We are very happy that the South Asia Programme of Cornell University, USA has joined CPD in its endeavour to reflect on the Bangladesh’s journey in economic, social, cultural and political spheres during the last 50 years, she continued.

Our sincere thanks will remain for the session chairs, paper presenters and discussants. We are looking forward to a rich discussion on various aspects of Bangladesh’s journey and the way forward, she concluded.

Professor Rounaq Jahan highlighted that the conference will explore the country’s developments in different sectors – politics, economy, society and culture. Bangladesh today is vastly different from what it was fifty years ago when it emerged as an independent state.

At her birth in 1971 many outsides observers doubted the viability of the new state. Some called it “an international basket case”. But through the hard struggle of the people to pull themselves up from poverty and by innovative actions unique to Bangladesh, we made steady progress in key indicators of human development during the first quarter century of our independence.

In the next quarter century again through our own struggle and entrepreneurship we have made steady progress in key indicators of economic development. In recent years Bangladesh’s success in maintaining high economic growth has drawn the attention of international agencies and the Western media.

The country is now being called by some as a “development miracle” and by some others as a “paradox” which refers to Bangladesh’s record of sustaining high economic growth despite deficits in good governance. These brandings by western media, whether positive or negative are usually based on a superficial understanding of the enormous changes what have taken place in Bangladesh over the course of the last fifty years.

Rehman Sobhan had suggested that much can be done towards bringing greater justice to the governance process if the ruling regime remains committed to realizing Bangabandhu’s vision of a just society.

He said: Ensuring the rule of law for all, implementing policies and enforcing regulations, remain within the domain of a well-intentioned government and do not require revolutionary upheavals.

The move to realize more substantive advances towards a just society may need structural changes which require new legislation, even constitutional amendments, supported by changes in the balance of power which accommodates the needs, rewards the contribution and gives voice to the less privileged segments of society, he continued.

Here too the reforms suggested in my presentation of broadening access to the ownership of assets, ensuring more equitable participation of the less privileged in the market place, delivering quality education and health care to the less privileged and continuing Bangabandhu’s struggle for the greater democratization of both the institutions of democracy and the institutions of governance, can remain achievable goals. But such moves in the days ahead towards a more justly governed society, underwritten by policies for structural change, demand from both state and society a total commitment to carry on and sustain the struggle to realize the historic vision of Bangabandhu for a just society, Rehman concluded.

During the second session of the day one Dr Mirza Hassan presented a paper titled- Evolution of the State-Society Relations in Bangladesh: An Analytical Narrative.

Paper 2 titled  Islamist Politics in Bangladesh: The Nature, Scope and the Pathway