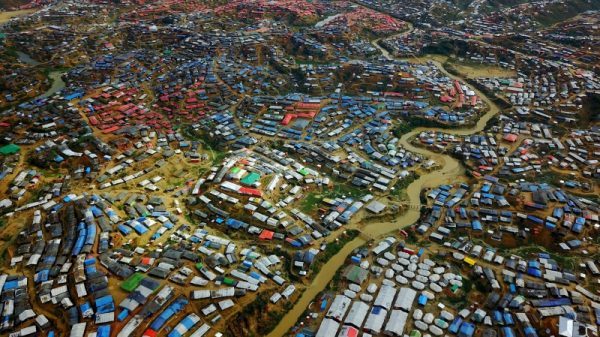 The rights based civil society organizations of Cox’s Bazar demanded ban on all kinds of plastics in the Rohingya camps to protect the environment of Cox’s Bazar.

From the human chain and discussion some of the demands are given below: (1) They want urgent steps of UN and INGOs to stop the use of plastic in Cox’s Bazar including Rohingya camps (2) In Cox’s Bazar, including the Rohingya camp, groundwater extraction must be stopped and ensure the use of surface water (3) UN and INGOs should take urgent steps to manage human waste in Rohingya camps (4) Afforestation should be ensured in the empty places of the Rohingya camps (5) Steps should be taken to make the abandoned lands cultivable in the Rohingya camp (6) Bakkhali river should be freed from pollution and occupiers (7) Reserved forest lease must be canceled (8) Throwing of toxic chemicals from hatchery to sea must be stopped (9) The administration should take strict measures to stop the extraction of sand from canals, rivers, seas, croplands, and hills (10) Hill cutting should be stopped immediately (11) The installation of concrete buildings in Saint Martin should be banned (12) The administration should take strict action to stop illegal brickfield (13) Beach-bikes must be prohibited on the beach (14) Effective steps should be taken to manage the drainage system of Cox’s Bazar city (15) An environment recovery fun should be created to restore the environment of Cox’s Bazar.

Fazlul Quader Chowdhury said, “Now, the environment of Cox’s Bazar is under threat. As a result of cutting down more trees, the amount of oxygen is decreasing. There are about 2.4 million people in Cox’s Bazar district as well as more than 1 million Rohingyas in Ukhia Teknaf. Due to excessive use of deep tube well the water level in Cox’s Bazar is going down day by day. On the other hand, the salinity of the water is increasing”. He also demanded various INGOs and UN agencies to take up projects to increase the use of surface water.

Nilima Akhter Chowdhury said, “Tons of plastic waste is being added to Cox’s Bazar every day. During the monsoon, these wastes are mixed in the sea, river, and land. The bottom of the river is filling up due to plastic waste, the river is losing navigability. About five lakh locals, as well as ten lakh Rohingyas, are generating tons of plastic waste every day which is causing a serious disaster in the local environment. There are also plastic alternatives. INGOs and UN agencies must come forward to stop the use of plastic products in the Rohingya camps.

Kalim Ullah urged the administration to take immediate and effective steps to stop illegal brickfields and sand extraction from rivers and canals in Cox’s Bazar in his speech. Ashok Kumar Sarkar called upon all NGOs, including INGOs and UN agencies, to come forward to reforest the blank spaces in the Rohingya camps. He mentioned that due to the Rohingya influx, a total of 176 hectares of cultivable land in Ukhia and Teknaf has been occupied. A total of 93 hectares of land has become uncultivable due to the plastic and man-made waste of 1 million people in the Rohingya camps. Urgent initiatives are needed to make the lands cultivable. H M Nazrul Islam said that two of the main rivers of Cox’s Bazar, Bankkhali and Kohelia are going to be endangered due to the occupiers. These rivers are being filled regularly. It is a crying need to free the rivers from the illegal occupiers and decontaminated. Maqbul Ahmed demanded an immediate end to the hill-cutting.