Data protection act to be acceptable to all: Anisul 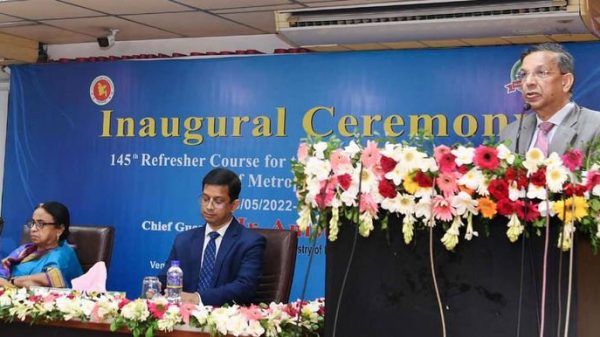 Data protection act to be acceptable to all: Anisul

Law, Justice and Parliamentary Affairs Minister
Anisul Huq today said the data protection act, which is being formulated,
would be acceptable to all and logical advices of all the stakeholders will
definitely be welcomed.

“We will discuss the matter with all the stakeholders including media and
business representatives by holding meetings with them before finalizing the
draft of the act. I would first hold a meeting with state minister for ICT
Division on June 1,” he said while talking to newsmen at Judicial
Administration Training Institute (JATI).

Anisul said all the similar acts in the world are being reviewed and this act
would be able to achieve the goal, for which it is being formulated.

Earlier, the minister inaugurated the 145th refreshers course for chief
judicial magistrates and chief metropolitan magistrates at JATI. In his
speech as the chief guest at the function, the minister reiterated the fact
that the Digital Security Act was not formulated to restrain the freedom of
speech or press freedom.

While talking about the ways to reduce the backlog of cases, the law minister
said the judges have to give more efforts in this regard.

“The government of Prime Minister Sheikh Hasina has taken different
initiatives to reduce backlog of cases. Before 2009, the number of judges in
the country was seven to eight hundred. Now it is more than 1900. As many as
1,225 judges have been appointed in last couple of years. Infrastructures
have been built. Transportation problem of the judges is getting solved,”
Anisul further said.

Presided over by JATI Director General Justice Nazmun Ara Sultana, the
inaugural function was addressed by Law and Justice Division Secretary Md
Golam Sarwar, among others.