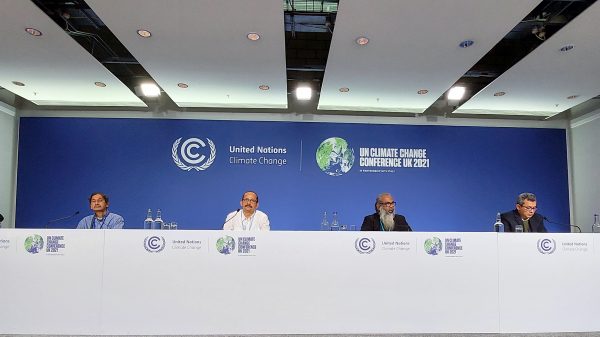 On November 05 2021, the ongoing Cop 26, Global Climate Conference in Glasgow-UK, Civil Society leaders from MVCs (Most Vulnerable Countries) have meet a press conference in conference venue and demand to end Carbon emission instead of so called “Net Zero target by 2050”.

They also demanded to developed countries should ensure adequate finance and appropriate tools those will support to effective climate action for MVCs (Most Vulnerable Countries) and LDCs (Least Developed countries).

Presenting the keynote, Aminul Hoque said that the COP-26 is being held in a transitional stage in the context of past failure of its commitments, but we hopeful for future as the developed countries have pledged to keep their committed action to reduce global warming and support MVCs to fight with climate change impacts. He put some key demands in favor of civil society, those are (i) Developed countries must change their theory of “Net Zero Target”, instead they should revise again the own country NDC (Nationally Determined Contribution) to “Zero Carbon emission” target by 2050, (ii) Developed countries will ensure adequate climate finance for LDCs & MVCs through both of the GCF (Green Climate Fund) and their public sources, iii. Ensure support to establish and full operationalization of proposed Loss & Damage Mechanism with separate financial allocation.

Soumya Datta said that the “net zero” is a phrase that represents magical thinking rooted in our future technology obsession. Just presume enough hypothetical carbon capture plan for climate goal. Collectively, “net zero” climate targets allow developed countries to continued rising levels of GHGs (Green House Gases) emissions instead of their reduction directly. That’s why it’s a false solution proposal and all country parties must to stop the discussion on such vague “Net Zero emission” and start the discussion on “Zero Emission target” through ending the fossil fuel and ending the Carbon emission.

Md. Shamsuddoha said the revised NDCs by developed countries and their full implementation will rise the global temperature above 02 degree which is unacceptable in fact. In such a context developed countries have required for a greater ambition on mitigation and concrete action to reduce global emissions by 45 per cent by 2030. This will have to be done through revision again their NDCs and setting new target for 2030 and 2050. This target to be done according to the principle of common but differentiated responsibilities and in light of national circumstances he opined.

Md. Masum said that developed countries are showing their ill attitude in financing to the adaptation which is very less and around 20% in against the current fund mobilization. The discourse of new collective climate finance goal will be a frame of “Climate Justice Perspective” where financial mobilization process will adequate and off course will surpass the 100 billion target. MVCs would be preferably prioritized in access the fund for both adaptation and later on mitigation.

Md. Shamim said every year millions of people displaced due to loss their all livelihood options and in there, violation human rights is one of the common phenomenon and happened due to climate change. Rich countries have responsibility to address the issue and ensure finance and technology support accordingly. The proposed mechanism of “Santiago Network for Loss and Damage” should support by them to make it full operationalize with proper financing he added.