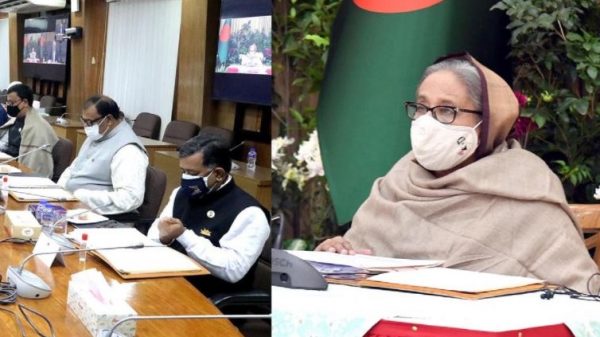 Bangladesh and Maldives are likely to sign a prisoner transfer agreement during the upcoming visit of Prime Minister Sheikh Hasina to Maldives.

The approval was given at the regular Cabinet meeting held with Prime Minister Sheikh Hasina in the chair. She joined the meeting virtually from her official residence Ganabhaban, while other ministers and officials concerned were at the Bangladesh Secretariat.

“Since some Bangladeshis are now in Maldives prisons, the ministry brought the agreement (before the cabinet)….. We expect this deal will be signed during this tour (PM’s visit),” said Cabinet Secretary Khandker Anwarul Islam while briefing reporters at the secretariat after the meeting.

He said 43 Bangladeshi convicts are in the Maldives jails, while 40 other Bangladeshis are under trial there but no national of Maldives is in the jail of Bangladesh.

According to the agreement, prisoners can be transferred from both countries, said the Cabinet Secretary, adding that Prime Minister Sheikh Hasina will go on a visit to Maldives within the next few days.

The Cabinet also endorsed the draft of another agreement over health sector cooperation between Bangladesh and Maldives.

Anwarul Islam said different types of Bangladeshi health professionals went to Maldives under a memorandum of understanding (MoU) signed between the two countries, but now Maldives has asked to extend the deed till 2024 and sign a full-fledged agreement instead of MoU.

“Maldives will take qualified health professionals —clinical specialists, public health specialists, dental surgeons and nurses and other auxiliary staff— from Bangladesh. So, they want to ink an agreement,” he said.

The Cabinet hoped that this agreement would also be signed during the Prime Minister’s visit.

The Cabinet in principle approved the draft of Unani and Ayurvedic Medical Education Act, 2021 with a provision of maximum one-year imprisonment or pecuniary punishment of Taka one lakh for unregistered practitioner in case of practicing the Unani and Ayurvedic systems of medicine.

As per the proposed law, there would be a board of directors and the government would appoint the chairman of the board, which will place its annual report before the government. There would also be a council to oversee the academic affairs, said the Cabinet Secretary.

The draft law was brought in order to replace a law of the military regime titled the “Bangladesh Unani and Ayurvedic Practitioners Ordinance, 1983” in the line with the higher court’s order, he said.

According to the draft law, no person can use degree, diploma or certificate unless it is recognised by any law or conferred by the authorised body, institutions or proper authority. If anyone breaks the provision, it shall be punishable for maximum one-year imprisonment and Taka one lakh as fine or both.

Besides, the Cabinet in principle approved the draft of Bangladesh Medical Education Accreditation Act, 2021 in order to bring the health education under an independent accreditation.

Anwarul Islam said there is a compulsion from the WHO that every country would have to come under a system or accreditation by 2023. If any country fails, its physicians, health technicians or medical students would not be recognised in other countries, he added.

There would be an independent accreditation council under the proposed law, said the Cabinet Secretary.

In answer to a question, Anwarul Islam said the health minister informed the Cabinet that they started the booster dose on trial on Sunday.

The Cabinet asked the Health Ministry to contact with international experts over which protocol would be followed during the rollout of booster dose of Covid-19 vaccine.

The Cabinet Secretary said there is no scarcity of Covid-19 vaccines in the country.