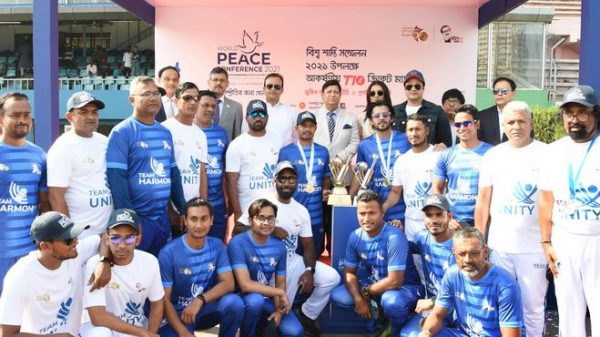 Foreign Minister Dr AK Abdul Momen today said Dhaka will adopt a ‘peace declaration’ at the ‘World Peace Conference’ to be held here from December 4 and 5 that expected a gathering of peace activists from more than 90 countries.

“Peace activists from nearly 91 countries are expected to join our peace conference where they will create a declaration on global peace,” he said.

The foreign minister made the remark while inaugurating a friendly T10 cricket match at Moulana Bhasani Hokey Staduim in the capital marking the World Peace conference.

Bangladesh is hosting the ‘World Peace Conference’ marking the Brith Centanary of Father of the Nation Bangabandhu Sheikh Mujibur Rahman and 50 years celebration of the country’s independence.

The foreign minister said Bangabandhu had been struggling for establishing global peace throughout is life as he believed that ‘peace is imperative for the development’.

He said Dhaka didn’t invite any head of states or governments to the conference rather it urged peace activists, writers, poets, singers and civil societies from different countries to join the conference for promoting a culture of peace and tolerance.

After the friendly match the foreign minister handed over trophy and medals to the participating players. Foreign secretary Masud bin Momen was also present among others.