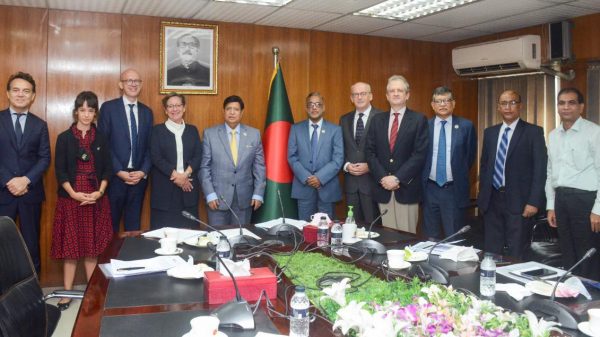 The urge was made while foreign minister DR A K Abdul Momen along with
environment, forest and climate change minister Md Shahab Uddin briefed the
ambassadors of the EU countries stations here regarding Bangladesh’s
preparation and expectation centering the COP26 at the foreign ministry.

“We want their (EU’s) partnership at the COP 26 … so that they talk in
favour of our issues those we will raise during the COP26,” Dr Momen told
newsmen at a briefing after the meeting with the European envoys.

During the COP 26, the minister said Bangladesh’s major issues will be to
get support from developed countries in climate adaptation to refrain people
from being climate refugees.

“We will raise the loss and damage issue during the COP26 … and we
sought their (EU’s) support in this regards,” Momen said adding that the
‘loss and damage’ issue has been added in the COP26 agenda.

The minister said, he urged the EU to contribute in realizing the 100
billion US dollar annual climate fund that was supposed to start from 2020,
pledged by the most carbon emitting developed countries at the Paris
agreement in 2015.

“We are optimistic that the $100 billion US pledge will be ensured during
the COP26,” he added.

He said Bangladesh will also raise the demand at the COP26 to allocate
climate fund for mitigation and adaptation under 50:50 ratio.

Dr Momen said, they also briefed the EU envoys about the Mujib Climate
Prosperity Plan as well as Bangladesh’s aspiration to transformation its
energy sector more to the renewable power.

The foreign minister said the EU countries assured providing technical
support to Bangladesh in its transformation to clean energy.

Dr Momen welcomed the ‘Net Zero’ carbon emission by 2050 declaration made
by the G7 countries, as those developed nations are the most carbon emitters
in the globe.

However, Dr Momen said Bangladesh would not be able to declare the ‘Net
Zero’ emission by 2050 as it is still a developing country and emits nominal
amount of carbon compared to the developed nations.

Dr Momen said as the President of CVF Dhaka has proposed to hold a high-
level climate summit on the sideline of COP 26. “The proposal is yet to
final, but it is on the table,” he added.

Bangladesh Prime Minister Sheikh Hasina along with other world leaders is
set to join the high level session of COP 26 from November 1 to 3 in Glasgow.

The Bangladesh Prime Minister is scheduled to hold a bilateral meeting
with her British counterpart Boris Johnson after attending the high level
event at COP26, either in Glasgow or in London.

The COP-26’s main host British Prime Minister Boris Johnson earlier said
he expected the event to be a “turning point for humanity”.