Dhaka wants to resolve issues with India through dialogue: Momen 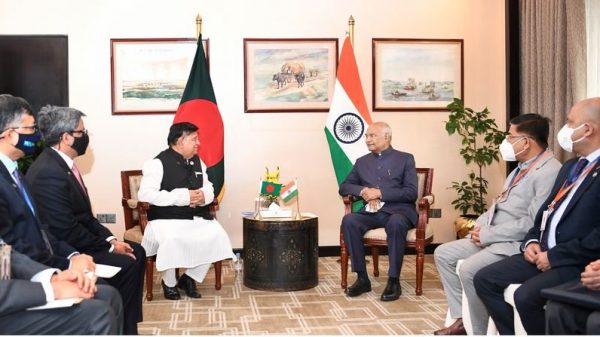 Dhaka wants to resolve issues with India through dialogue: Momen

“(We do believe), It is possible to resolve any issue between Bangladesh and India through dialogues,” he told media along with state minister for foreign affairs Md Shahriar Alam at Pan Pacific Sonargaon hotel, the temporary abode of visiting Indian President Ram Nath Kovind.

Momen along with the junior minister appeared before the press after they called on the Indian head of the state while they subsequently accompanied Prime Minister Sheikh Hasina as she made a courtesy call on President Kovind.

Reflecting on the premier’s talks with the Indian president, Momen said the ongoing “deep and excellent” bilateral relations continued to yield peace and stability in the region.

Momen said various issues including connectivity, water sharing, ongoing participatory projects and Rohingya issues came up in his meeting with the Indian president along with Alam.

“I expressed my hope that Bangladesh and India would conquer the peak of development in next 50 years through mutual cooperation,” Momen said

Momen said he told Indian President that Sheikh Hasina brought stability in Bangladesh through making tremendous success in socio-economic development while she would like to extend her efforts for the “stability” in the region.

The foreign minister said Bangladesh and India were on the same page at different international forums and “Dhaka wants to continue it”.

“Bangladesh and India are enjoying golden chapter of bilateral ties which other countries can follow,” he said adding that he thanked Kovind for Indian vaccine donation to Bangladesh amid the ongoing pandemic.

He also expressed gratitude also for his maiden Bangladesh visit as the Indian president amid pandemic to join the Golden Jubilee celebrations of the Independence of Bangladesh and Birth Centenary Celebrations of Father of the Nation Bangabandhu Sheikh Mujibur Rahman.

Bangladesh rolled out a red carpet to welcome the Indian President, his wife Savita Kovind and daughter Swati Kovind along with an official delegation as he arrived here this morning on a three-day visit.