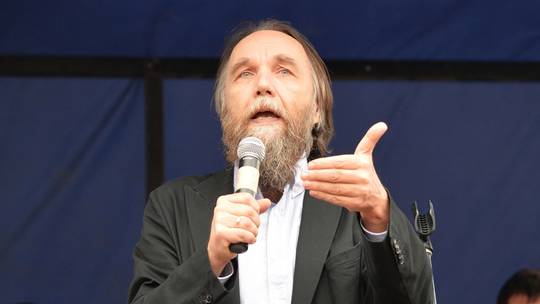 Philosopher blames “Nazi Ukrainian regime” for car bombing that killed his daughter.
Russian philosopher Aleksandr Dugin has released a response to Saturday’s car bombing outside Moscow, which may have targeted him but claimed the life of his daughter Darya. On Monday, Dugin blamed the Ukrainian government for the murder and said he wanted a military victory rather than revenge.

“As you know, in a terrorist act by the Nazi Ukrainian regime, my daughter Darya was savagely murdered before my eyes on August 20, while returning from the ‘Tradition’ festival near Moscow,” Dugin said in a statement released by his ally, conservative tycoon Konstantin Malofeyev.

Darya was “a beautiful Orthodox girl, a patriot, a military correspondent, a TV expert and a philosopher. Her speeches and reporting have always been profound, grounded and restrained. She never called for violence or war. She was a rising star at the beginning of her journey,” Dugin wrote. “The enemies of Russia killed here dishonorably, on the sly.”

Such acts of terrorism want to break the will of Russians by targeting the best and most vulnerable among them, Dugin said, adding that the terrorists will not succeed. Wishing for simple revenge or retribution would be “too petty, and un-Russian,” he added.

“Instead, we need victory,” Dugin wrote. “So win, please!”

Dugina was driving her father’s Toyota SUV when it exploded, leading Russian authorities to suspect the bomb was meant for him. The FSB has identified the perpetrator as Ukrainian national Natalya Vovk, 43.

On Monday, the Russian security service released a video showing Vovk entering the country as a brunette with Donetsk People’s Republic license plates last month. She was accompanied by her teenage daughter, whose surname was given as Shaban. Vovk was also registered as renting an apartment in the same Moscow building as Dugina, and leaving the country hurriedly on Sunday – crossing into Estonia with Ukrainian license plates and her hair dyed blonde.

Vovk, under the surname Shaban, appeared on the list of Ukrainian National Guard personnel that was published in April on the Russian internet. The doxx claimed she was associated with the “Azov” neo-Nazi regiment. Ukraine has denied any official involvement in the bombing.