Earthquake kills at least 280 in Afghanistan 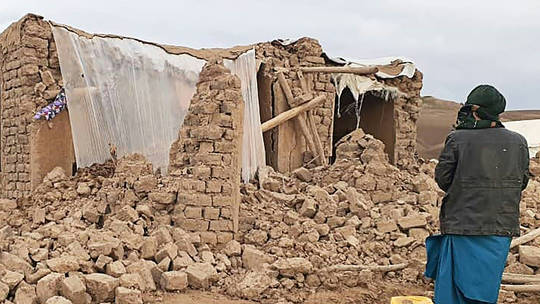 Earthquake kills at least 280 in Afghanistan

A 6.1 magnitude quake hit the southeastern part of the country.
At least 280 people have been killed and many others are injured after a 6.1 magnitude earthquake rocked Afghanistan early on Wednesday, the ruling Taliban’s official news agency Bakhtar has said.

The epicenter was located some 44 km (27 miles) from the city of Khost in the southeast of the country at a depth of 51km (31 miles), the US Geological Survey (USGS) has said. The earthquake also affected parts of neighboring Pakistan.

Most of the fatalities and destruction have been reported in the Afghan province of Paktika. According to Bakhtar, at least 280 were killed and over 600 others injured there.

Local authorities have warned that the death toll could rise if help doesn’t arrive from Kabul.

Images from the area on social media have captured homes being reduced to rubble by the tremors.

“A severe earthquake shook four districts of Paktika province, killing and injuring hundreds of our countrymen and destroying dozens of houses,” Bilal Karimi, a deputy spokesperson for the Taliban government, wrote on Twitter. “We urge all aid agencies to send teams to the area immediately to prevent further catastrophe.”

The emergency services earlier said there were also fatalities in the nearby Nangarhar and Khost provinces.

Shockwaves were felt by around 119 million people in Pakistan, Afghanistan and India, the European Mediterranean Seismological Centre (EMSC) has said. Tremors were reported by witnesses in Afghan’s capital Kabul as well as Pakistan’s Islamabad.