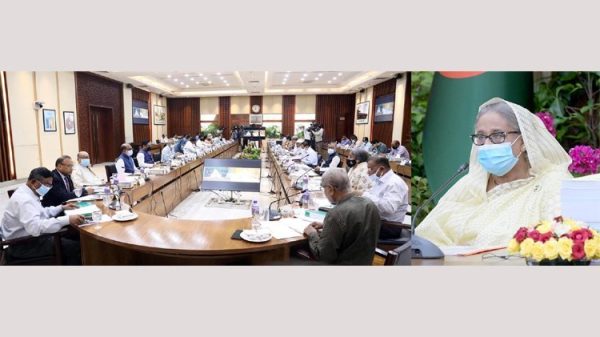 The Executive Committee of the National Economic Council (ECNEC) today approved the 2nd revision of the much hyped Dhaka Mass Rapid Transit Development (Line-6) project with an additional cost of Taka 11,486.92 crore in order to introduce a modern public transportation system in the capital for giving respite to the city dwellers from traffic congestion.

The approval was given from the 1st ECNEC meeting in the current fiscal year with ECNEC chairperson and Prime Minister Sheikh Hasina in the chair.

The premier joined the meeting virtually from her official Ganobhaban residence while ministers, state ministers, Planning Commission members and secretaries concerned attended the meeting from the NEC conference room in the city’s Sher-e-Bangla Nagar area.

Briefing reporters after the meeting virtually, Planning Minister MA Mannan said that a total of eight projects were approved today involving an overall estimated cost of Taka 15,856.80 crore. “Of the total project cost, Taka 12,444.25 crore will come from the government of Bangladesh, Taka 134.57 crore from the concerned organization’s own fund while the rest Taka 3,277.98 crore as project assistance.”

Of the approved eight projects, four are new while four others are revised projects.

As per the 2nd revision of the Metro Rail Project, there will be civil works, rolling stocks modification, E & M system and station plaza construction from Motijheel to Kamalapur Line. With the latest revision, the length of the metro rail (Line-6) will increase by 1.16 km while the total cost will reach Taka 33,471.99 crore.

State Minister for Planning Dr Shamsul Alam said that the ECNEC meeting discussed about the launching of the much hyped metro rail (Line-6) likely on December 16 this year with an aim to ease the traffic congestion in the capital. Initially, the metro rail will operate from Uttara to Agargaon as the work on the 11.73 km Diabari-Agargaon portion is nearing completion.

The other projects approved in the meeting are Upgrading Hathazari to Raozan portion of Chattogram-Rangamati national highway into four-lane with Taka 104.69 crore, Upgrading Itakhola-Mothkhola-Katiadi Road and Noyapara-Araihazar-Narsingdi-Raipura regional highway into due standard and width at a cost of Taka 984.85 crore, Construction of Pipeline from Dhonua to Mymensingh for ensuring gas supply to Mymensingh Combined Cycle Power Plant at a cost of Taka 553.16 crore.